Pink Lady, Granny Smith, Bramley, Gala – the list of different types of apples has thousands of varieties (which you will be glad to know I have neither time, patience nor space to write out here). Apples are one of the most widely eaten fruits and have been cultivated and eaten for millennia. They appear as symbols in many religions in both good and bad settings but are nonetheless still there. Also, apples just taste plain amazing – my favourite type is Pink Lady apples, what’s yours?

In religion we find apples appearing over and over again. In Judaism, we eat apples dipped in honey on Rosh Hashanna (the Jewish new year) but interestingly there is no actual command for this; in fact people used to eat whatever was the most readily available sweet fruit, which at times has included both figs and dates, dipped in honey. The apple appears in the Song of Songs and is also referenced in the Zohar (a mystical Jewish text from the 13th century). Within Christianity, the forbidden fruit in the garden of Eden is often depicted as an apple although the bible never actually states this. This confusion dates back to Roman times when versions of the bible in Latin made a typo – an incredibly minute but critical mistake. The mistake came in Genesis 2:17 when referencing ‘the tree of knowledge of good and evil’ when the word mălum (evil) was confused with mālum (apple). This is also where the term “Adam’s apple” comes from for the lump in men’s throats was believed to represent Adam’s inability to swallow the fruit.

In ancient Greek mythology, one of Heracles’ tasks was to collect the golden apples of immortality from the garden of the Hesperides. This tree was a wedding gift from Gaia to Hera when she accepted Zeus’ hand in marriage and was protected by a hundred headed dragon which never slept. The apple returns again in one of the most famous stories of ancient Greece: the Trojan War. The legend state that Eris – the goddess of strife and discord – tossed a golden apple into a wedding feast which the gods were attending with the inscription “for the fairest one”. Athena, Hera and Aphrodite all claimed it and eventually Zeus proclaimed the decision would fall to Paris. Paris chose Aphrodite as she had promised him the most beautiful woman in the word – Helen of Troy (at that time, Helen of Sparta) – resulting the one of the largest battles in Greek mythology and leading to the creation of Rome!

As you may have guessed, I am a fan of Greek mythology but these stories show how apples have permeated history.

Apple crumble is one of my favourite dishes at home as it’s one of those comfort foods that is just never as good when someone other than your mum makes it. I have never managed to make it as well as her but what I can have a pretty good go at is an apple tart. This recipe is more of a flan/tart than a pie as there is no pastry lid but you are welcome to add one if you like – just be warned, you may have to play around with the cooking time to make sure all the pastry is cooked through (but at least you wouldn’t have to worry about the filling burning). These apple tarts look stunning and are sure to wow any guests you serve them too! No only that but they are vegan (just use the non-egg/non-dairy alternatives given – you can’t even tell the difference).

Enjoy the recipe and happy baking!

125g cold margarine or butter. The margarine should be the block version, not the spreadable one from a tub.

Two tablespoons of water (or one egg)

For the apple compote:

To make the pastry cube the fat and rub into the flour until the mixture looks like fine breadcrumbs. 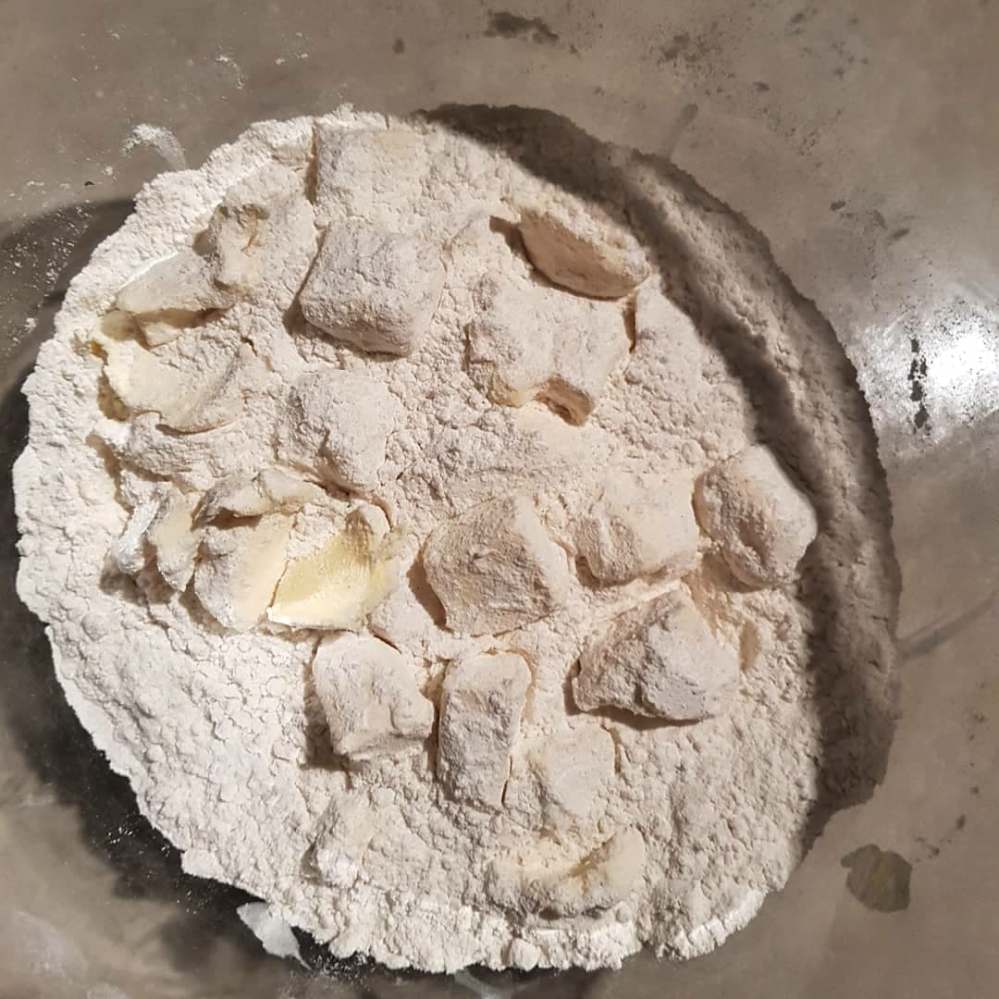 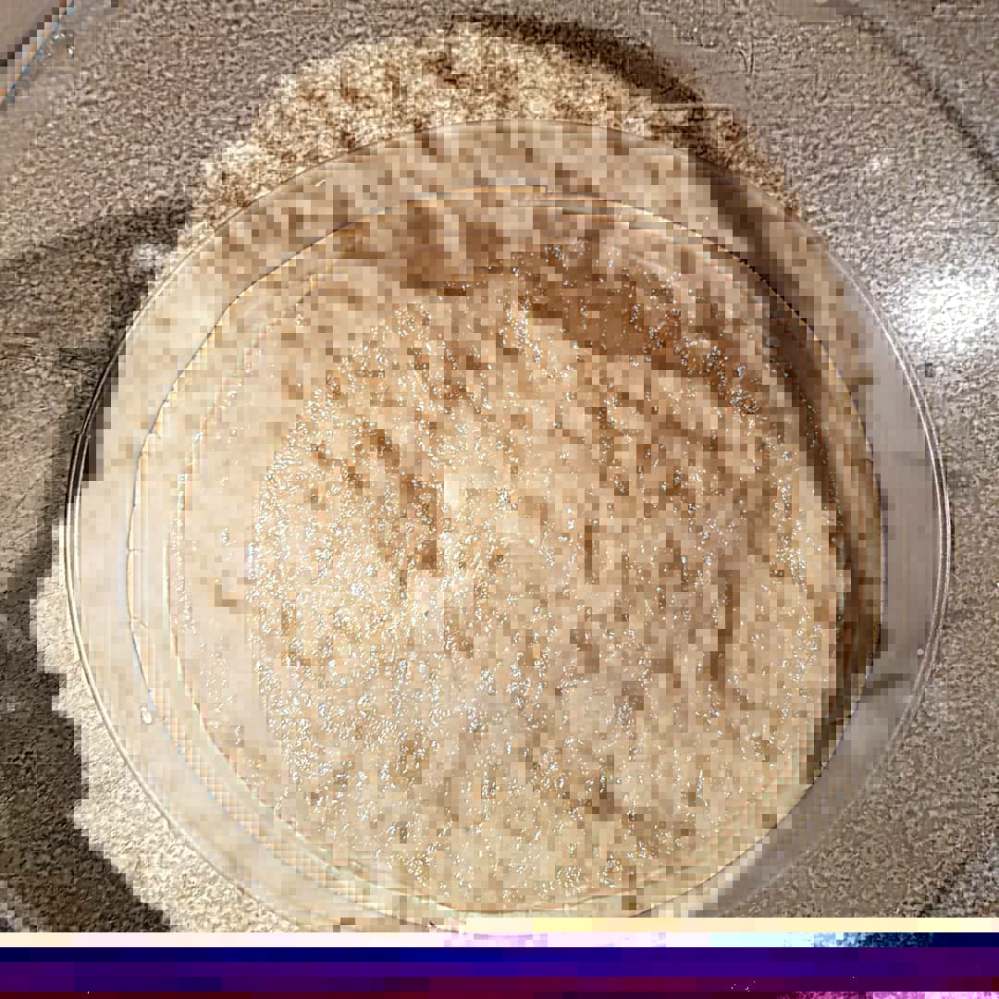 Stir in the sugar and the salt.

Make a well in the centre, add the water or egg and mix with the flat of a blunt knife until the mix starts coming together (I use just a normal table knife).

Pour out onto a surface and knead until the pastry forms a single ball. If it seems too dry, add a little bit of water as its better to knead the pastry a little more than necessary than have it fall apart when cooking. 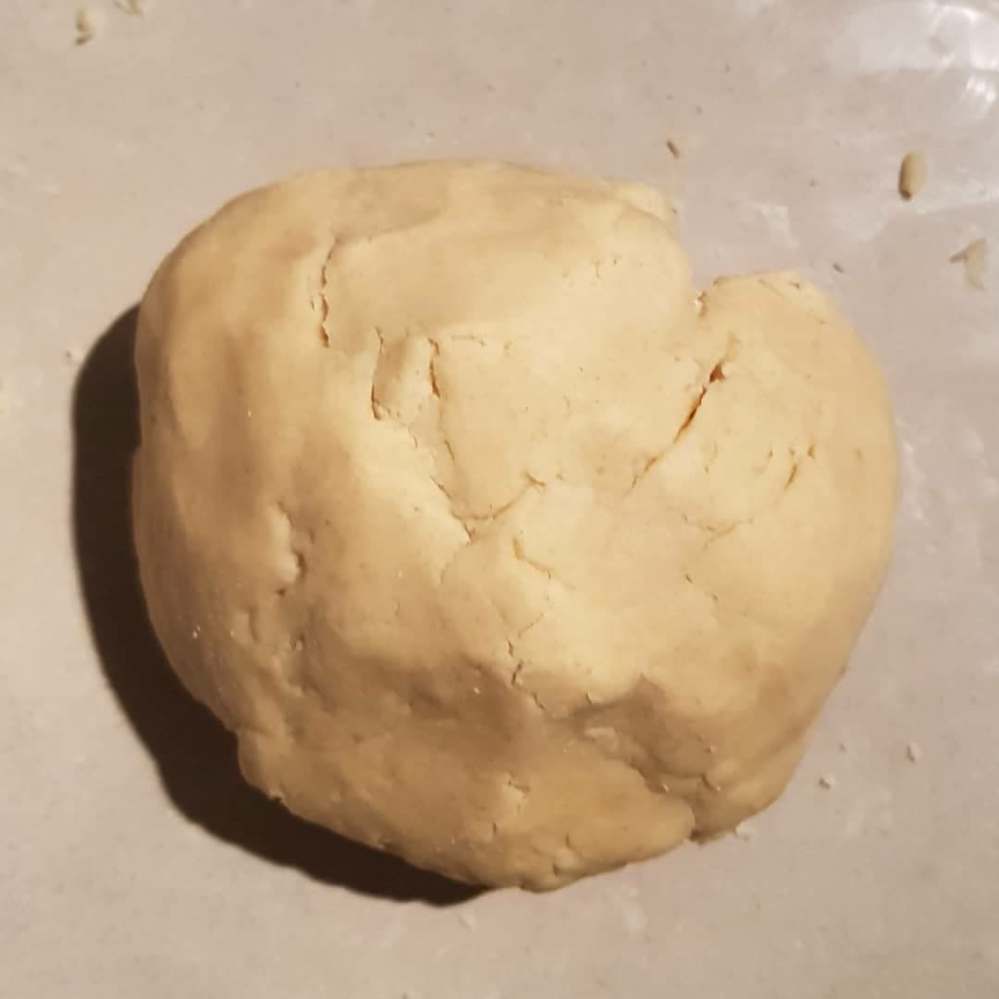 Wrap in cling film and pop in the fridge to cool.

For the compote, peel, core and chop the apples.

Place them in a saucepan with the rest of the ingredients, cover with a lid and cook for 10 minutes until the apple is soft. 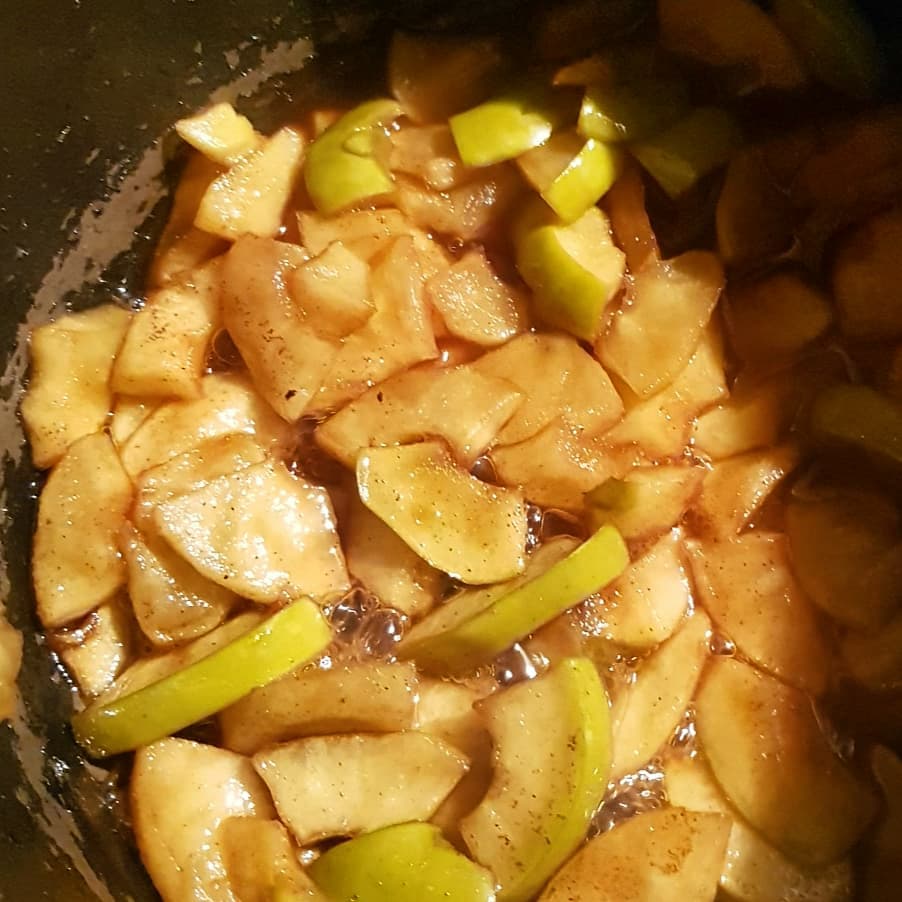 Using either a potato masher or a blender/stick blender, puree the compote (it’s ok if it is a little bit lumpy).

Set this aside to cool.

Preheat the oven to gas mark 6.

Once the compote has cooled, roll out the pastry to about the thickness of a £1 coin and line a nine inch tart case or alternatively, the base of nine inch cake tin and about one inch up the side.

Spread the compote over the base of the pastry being careful not to damage the pastry as it is still uncooked. 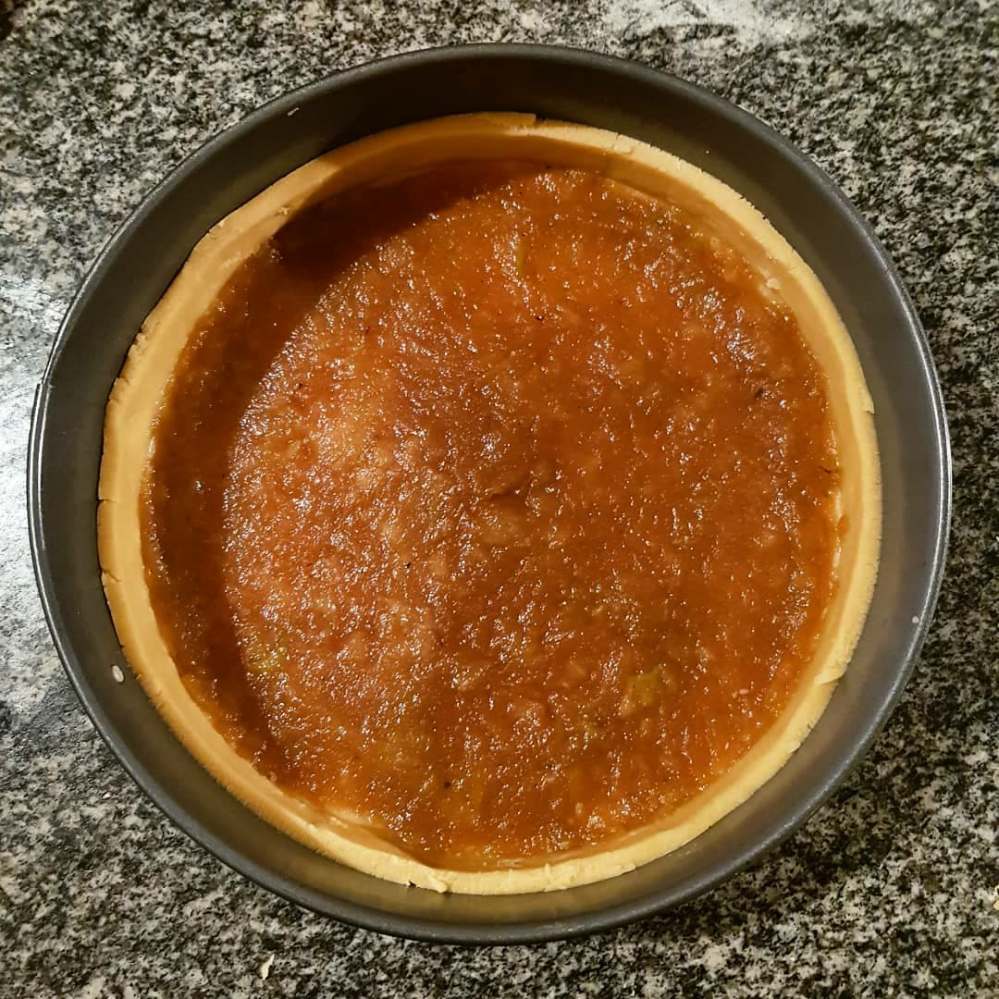 Peel two of the remaining apples.

Use an apple corer to remove the cores and cut the apples in half from top to bottom.

Place the apples on the side and use a sharp knife to cut them 1mm slices.

Arrange the slices in concentric circles overlapping each inner circle with the one it lies within. In the central portion of each layer, add a couple of end piece of apple to fill in the height difference.

The final tart should rise slightly in the centre. 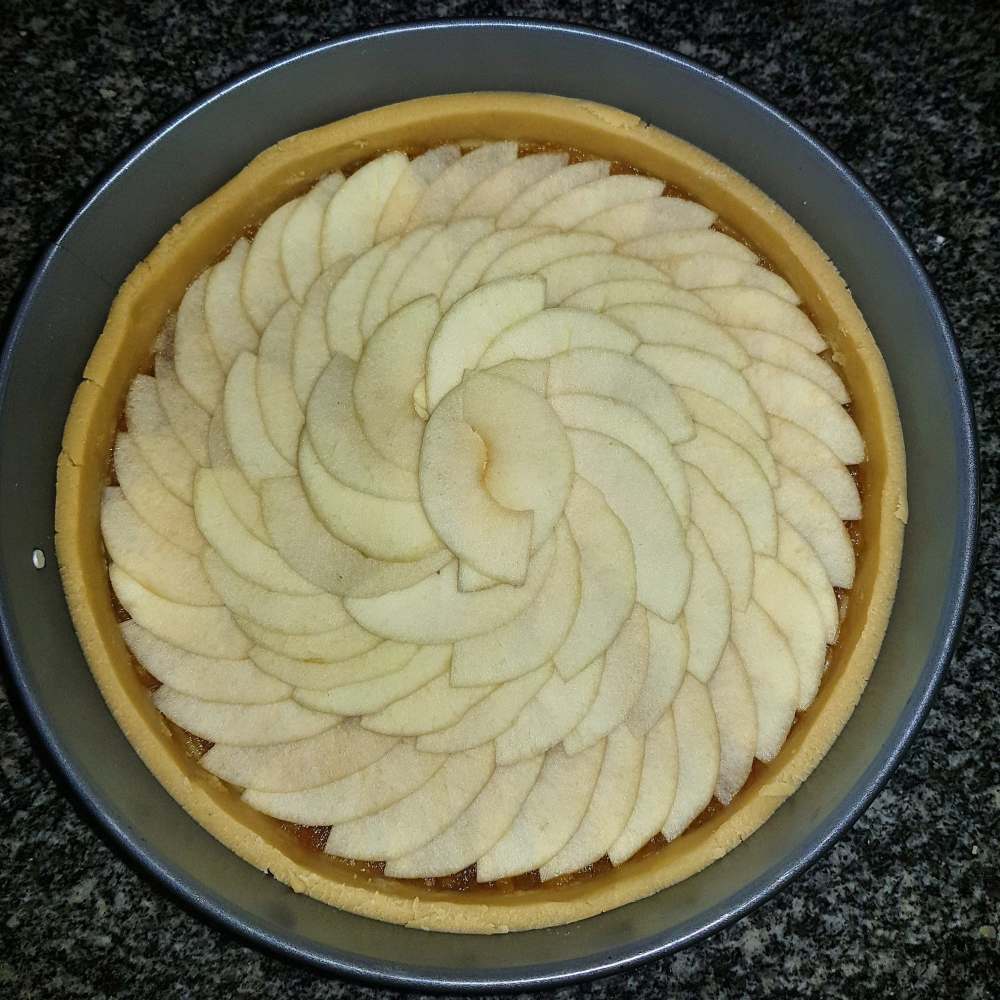 Cut up the margarine or butter and place little pieces of it all over the tart.

Sprinkle over the sugar. 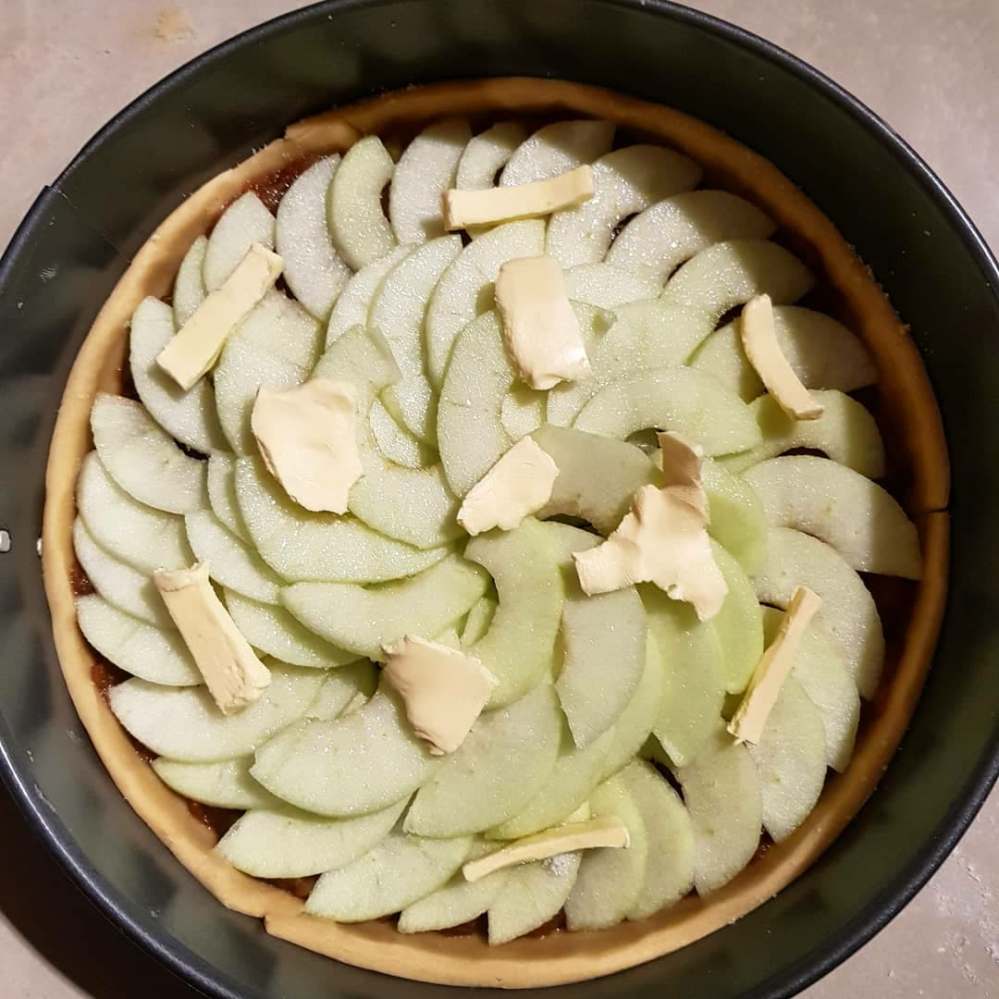 Bake in the centre of the oven for 20-25 minutes or until the apple starts browning round the edges.

Melt the apricot jam or if using syrup, add a quarter cup of sugar and two tablespoons water to a pan and bring to a boil as the sugar dissolves. Boil for two minutes and then remove from the heat.

Remove the tart from the oven and while it is still hot, use a pastry brush to gently brush the hot syrup or jam over the apples to give them a beautiful shiny finish.

Serve the tart warm or cold with ice cream/cream/custard – whichever you prefer!

I hope you enjoyed the recipe. Check out last week’s recipe for beef stir fry or if you want another sweet treat, have a look at my recipe for choux buns.

Have a good one and I’ll be back next week with a recipe for Tomato and Pepper soup!