For those of you who have been following me for some time, you may remember a blog post from a little over a year ago in which I discussed the controversies surrounding the pronunciation of the word scone – and the additional arguments about the order in which the cream and jam should be applied. The thing about the scone debate is that, even though it still rages to this day, it has never made it into the court (as far as I am aware- please correct me if I am wrong). The same cannot be said for the Jaffa cake.

Jaffa cakes are a British snack created in 1927 by McVitie’s (originally McVitie and Price). They consist of a small cake layer and a thin circle of orange jam, topped with a layer of chocolate. Many supermarkets in the UK sell own brand Jaffa cakes as McVitie’s never trademarked the name and so, whilst the originals may still be the best-selling cake in England, you can find other varieties all over the place. I recently tried some similar style snacks from Poland some of which had raspberry jam and others blueberry.

The controversy surrounding Jaffa cakes arose because, in the UK, chocolate covered biscuits (for example: chocolate digestives and chocolate hobnobs) are taxed whilst chocolate covered cakes are not. The issue with Jaffa cakes was that they seemed to be created to avoid tax because they are eaten in the same manner and circumstance that you would eat a biscuit but are culinarily defined as a cake. It should be noted that McVitie’s have always classed them as a cake whereas HMRC wanted to class them as a biscuit to increase revenue from taxes which lead to the infamous court case.

The argument reached a climax in 1991 when it entered the court. There were many things taken into consideration before the final decision was given: Jaffa cakes are closer in size to a biscuit than a cake; they are advertised and packaged in the same manner as biscuits; they are displayed in the biscuit aisle of supermarkets and not with the other cakes; the batter for the “cake” contains egg, sugar and flour – it is a genoise sponge – and is closer to cake batter than biscuit dough; when they go stale, Jaffa cakes harden like stale cake and do not soften like a stale biscuit; the texture of a Jaffa cake is soft like a cake whereas biscuits are hard and can be snapped; and of course the product is literally called “Jaffa cakes” not “Jaffa biscuits”. The judge noted this final point and all but dismissed it saying that it was only a minor consideration. I still can’t make up my mind on which side of the debate I think the Jaffa cake falls but I definitely do eat them like a biscuit – then again I would never dunk one in my tea!

The cake in the recipe below is a Jaffa cake inspired cake. It is not meant to be recreating one but it should be reminiscent of a Jaffa cake. To that end, the top is designed to have the same shape as a Jaffa cake with the cake, jam and chocolate layers but it has been scaled up a bit. I would also recommend spreading the marmalade layer at the top of each piece over the rest of the slice unless you particularly enjoy eating a mouthful of marmalade (I don’t judge… peanut butter and Nutella are very eatable with a spoon…). The chocolate ganache replaces the actual chocolate on a real Jaffa cake because if you scaled up and had a proper chocolate layer, the cake would be uncuttable. It would be a messy nightmare waiting to happen.

I chose to set the jam with pectin for this as I find that vege-gel has a bizarre flavour and both real and vegetarian jelly are kind of wet meaning buttercream won’t stick. Frozen pectin set marmalade, on the other hand, adheres to the buttercream really well and gives a fantastic shape to the final cake.

Setting time: as long as possible (overnight if you can)

Just to fill between the layers:

For the jam layer:

Line a six-inch cake tin with cling film and spoon the marmalade in.

Place in the freezer.

In a pan, heat the marmalade until it has mostly melted but is not yet boiling.

In a separate pan, whisk the pectin into 60ml (1/4 cup) cold water. You may need to use a blender to get rid of all the lumps.

Heat the pectin water until it begins to slacken up.

Pour the pectin water into the marmalade and whisk it all together.

Heat the marmalade until It is boiling and allow to boil for one minute.

Turn the heat off and pour the marmalade into the tin.

Allow to set for an hour at room temperature before moving to the freezer.

In the bowl of a stand mixer, cream the butter and sugar until light and fluffy.

Add the eggs one at a time, beating after each addition until the egg is fully incorporated. If the mixture looks like it is about to split, add a tablespoon of flour to bring it back together. If your eggs and butter are at room temperature, the mixture should not split at all.

Once all of the eggs have been added, beat in the flour in three additions. 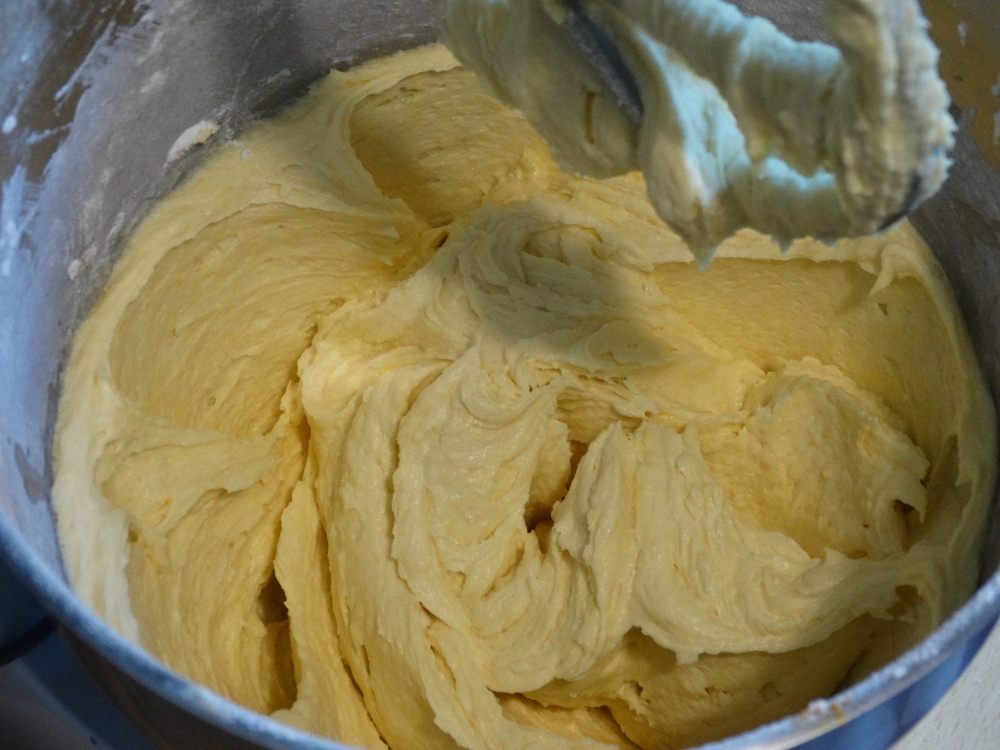 Split the batter evenly between the tins, level it and bake the cakes for about 35 minutes or until they are golden brown on top and a skewer inserted into the centre comes out clean.

Allow to cool in the tins for five minutes before transferring the cakes to wire cooling racks to cool completely.

Optional: To make the syrup

Pour the sugar and juice into a pan.

Bring to the boil and allow to simmer for one minute.

Remove from the heat, stir through the triple sec and allow to cool.

To make the buttercream:

Beat the butter in a stand mixer with the whisk attachment until it is light and fluffy.

Add half of the sugar and beat until fully combined.

Add the rest of the sugar and the cocoa and beat again.

If the icing is very thick, add the milk and beat again to combine. This should result in a fluffy, soft icing which can be easily spread.

To assemble the cake:

Level the cake layers and lay the first on an eight-inch cake board.

Use a pastry brush to brush syrup all over the top of the cake.

Spread a layer of buttercream on the cake.

Add another layer of cake and repeat until all the layers have been stacked and covered in buttercream.

If you are covering the entire cake, remove some of the buttercream for later and use the rest to create a layer of icing down the sides of the cake. And over the top.

You do not need to crumb coat as the entire cake will be covered in ganache so this layer will not be seen.

Remove the marmalade from the freezer, place it in the centre of the cake and cover in the remaining buttercream smoothing over the edges so the top is reminiscent of a jaffa cake.

Place the cake in the fridge for at least an hour to firm up the buttercream.

Chop the chocolate and place it into a large bowl.

Heat the cream until almost boiling (but don’t let it boil) and pour it over the chocolate.

Allow to stand for two minutes and stir together.

If you are only ganaching the top, gently pour the ganache over the centre and work outwards being careful not to let it flow over the edges of the cake. You can use an inverted cooling rack to get the lines across the top which a real Jaffa cake has in the chocolate.

If you are ganaching the entire cake, place the cake (on its board) on a cup or jar to raise it off the surface so the ganache can drip down the cake and off the sides. I like to do this over a baking tray so the excess ganache can be collected and used at a later date. 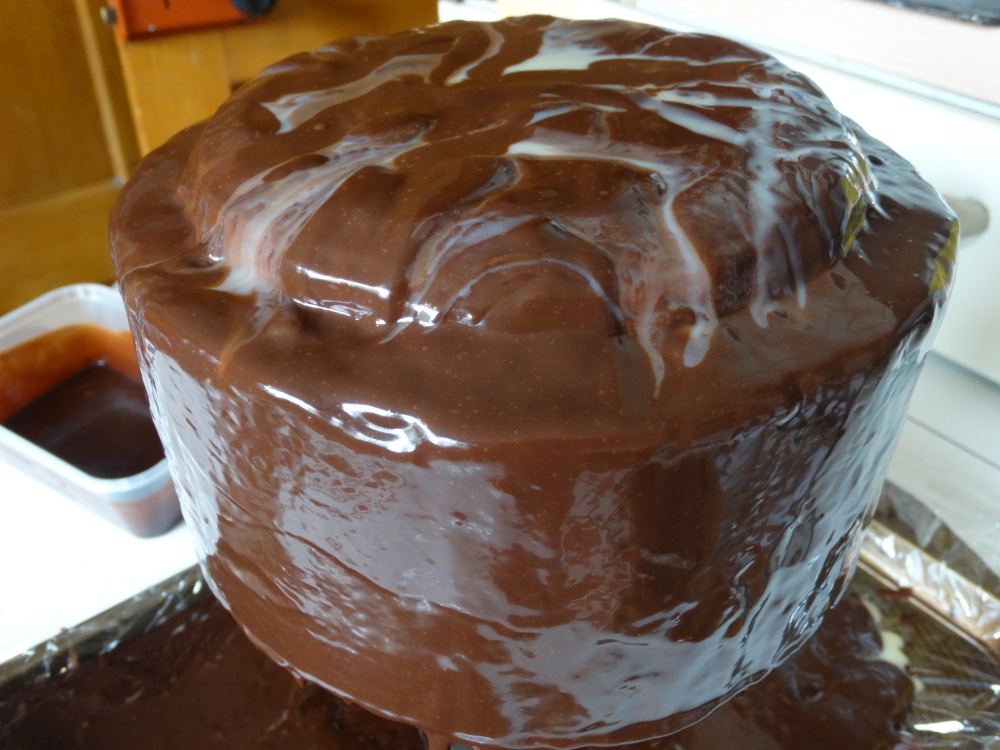 Allow the ganache to set for half an hour and then transfer the cake to a serving board. You can decorate the cake as you wish now. I like to do something to cover up the ragged edge around the base – this can be piping excess buttercream in a border or covering the base of the cake in mini decorations.

I would suggest when you serve this that people spread the marmalade in their slice over the whole cake and don’t just eat it as a separate layer but that’s just how I would eat this cake – you may know people who are happy to eat marmalade by itself.

Have a good one and I will be back next week with a recipe for a delicious soup.