The smell of cinnamon buns baking in the oven is hard to beat. One of the best things about baking is that you can fill your house with the aroma of delicious sweet and savoury treats but within those smells there is a definite hierarchy. Bread, chocolate brownies and cinnamon buns have to be at the top of the list; I love cake as much as the next baker but the smell of cake in the oven doesn’t quite make me salivate and prepare to overeat in the same way that breathing in the scent of pure chocolate goodness or hot, sweet, fluffy buns does.

Cinnamon can be bought either as sticks or as a powder but, no matter how you try to disguise it, cinnamon is tree bark. There are several species from which it can be obtained but, in essence, it is the dried inner bark of trees of the genus Cinnamomum. This genus is part of the Lauraceae family, which also includes herbs such as bay leaves (bay laurel) and the classic millennial food: the avocado. Cinnamon is extracted by scraping the outer bark off freshly cut trees, beating what is left of the tree until the inner bark detaches from the rest of the plant and finally prying off the inner bark and leaving it to dry. After all of that work, only a thickness of around half a millimetre is actually used for the spice. The cinnamon trees are far thicker than the final cinnamon sticks which you can buy but as it dries, the bark curls up into the tight spirals which can be seen in the sticks (or quills). In Sri Lanka – one of the primary suppliers of cinnamon to the world – the tightness of the curls is used as a method of grading the product.

There are records of cinnamon dating back over four millennia, although some believe that what was recorded as cinnamon back then was actually cassia (native to China) – another species within the Cinnamomum genus but not true cinnamon (Cinnamomum Verum which is native to India, Bangladesh, Sri Lanka and Myanmar). Cinnamon was highly prized and was gifted to leaders as well as being used as an offering in temples. Around 2000 years ago, the price of a pound of true cinnamon (about 1500 denarii) was roughly equivalent to 50 months labour for the average Roman. The price dropped rapidly from there as people started to use cassia which was far more available (a mere 125 denarii per pound) and tastes very similar. Nowadays cinnamon costs about £35 per pound for the standard own brand cinnamon sticks in a supermarket.

The primary constituent of the essential oil in cinnamon, and the one which gives cinnamon its distinctive smell, is cinnamaldehyde. This is what infuses your house when you bake cinnamon buns. As the boiling point of cinnamaldehyde is 248°C, baking will not drive off all of this compound so there will still be plenty left in the buns after cooking to give them the taste that you want. Obviously you can change the amount of cinnamon in the filling to suit your own taste but be careful not to put too much in. If you over cinnamon your buns, the filling can trigger pain receptors in the mouth giving a feeling akin to burning – this is what hot cinnamon sweets do. In the quantities given in the recipe, you won’t experience the burn and all you will get is cinnamon flavoured, yeasty heaven.

These things really are divine.

In the bowl of a stand mixer, whisk together the flour, sugar, salt and yeast. 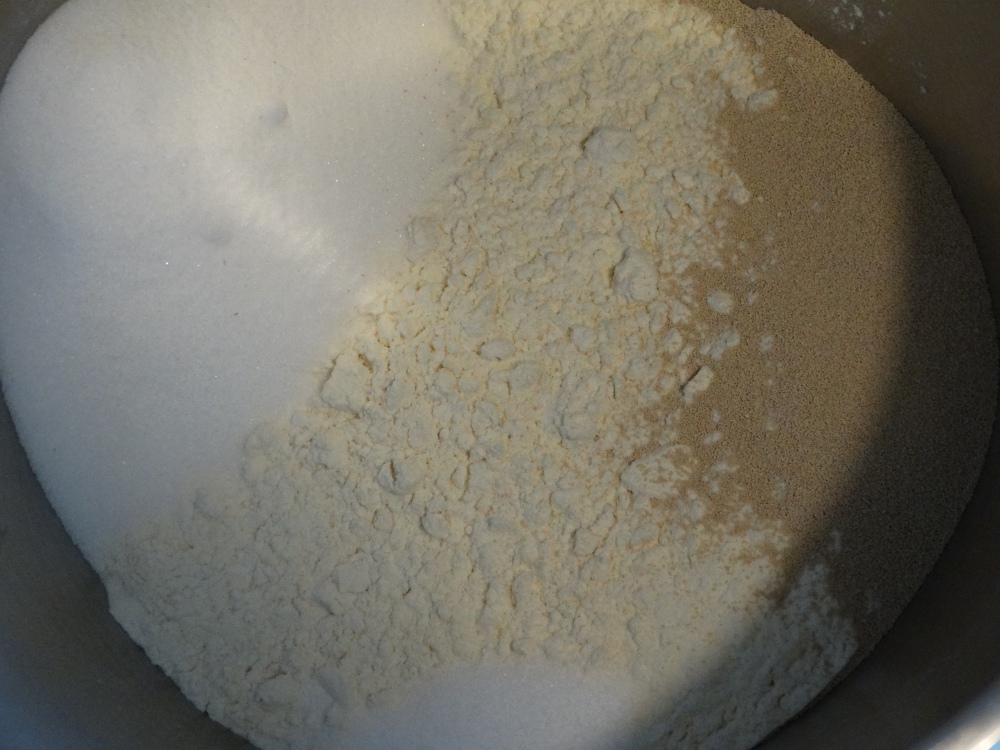 In a pan, gently heat the milk, water and butter until the butter has melted and the mixture feels warm to the touch but not hot.

Add the milk and butter to the dry ingredients along with the eggs.

Mix together slowly using a dough hook until a dough is formed – this will prevent you accidentally covering the kitchen in flour. 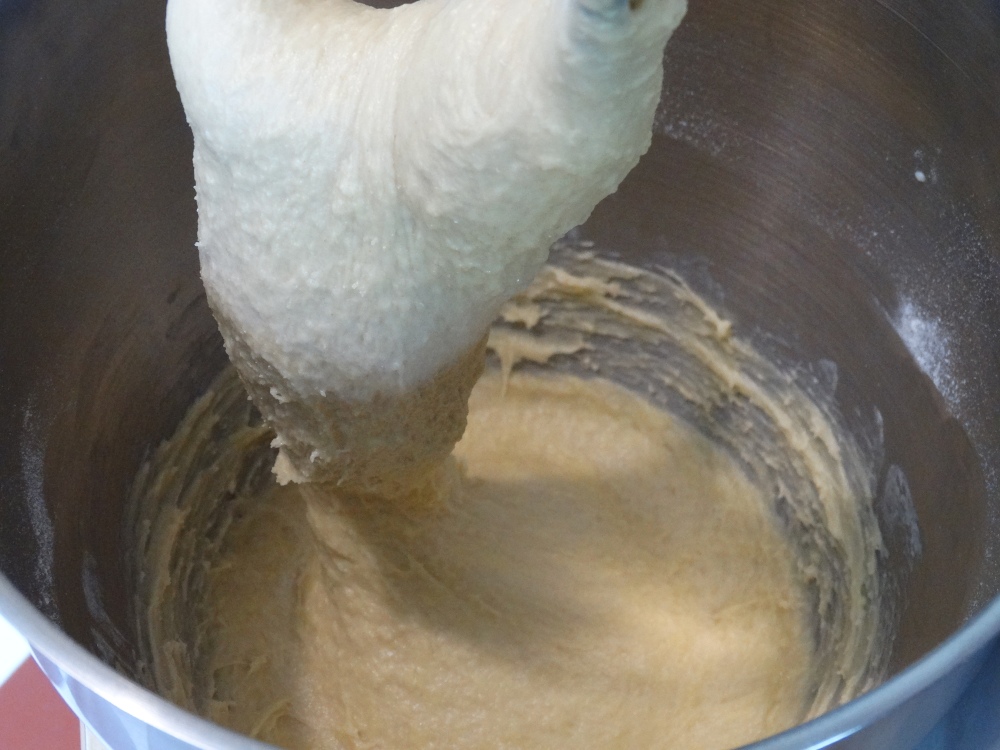 Switch the mixer to medium and knead the dough until it starts to come away from the sides of the bowl.

Turn the dough out into a lightly oiled bowl, cover and leave to rise for 30 minutes.

While the dough is rising, beat together the butter, sugar and cinnamon for the filling until it is very soft. You need to be able to spread this on the dough after it has been rolled out without tearing it.

Grease a large baking dish. I use a tarte tatin tin. 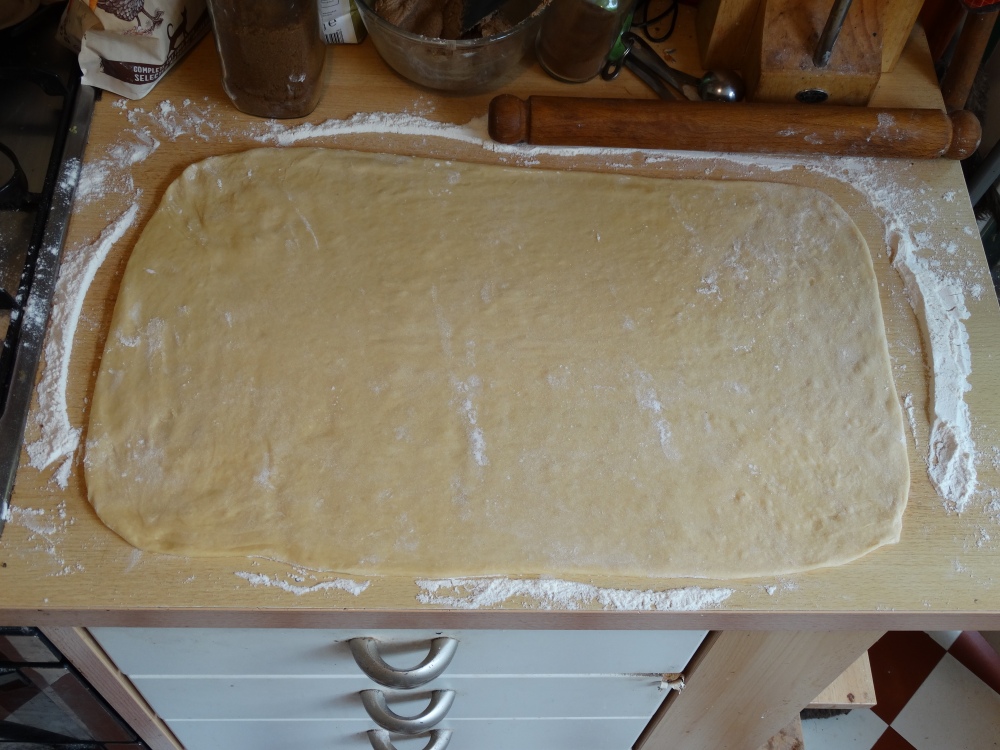 Spread the dough with the filling making sure to spread all the way to the edges.

Roll the rectangle of dough up lengthwise into a sausage shape.

Trim off the ends as they will be messy and not have as much filling.

Cut the sausage into twelve to sixteen little spirals.

Place the spirals into the baking dish making sure to leave an inch or so between them so they can rise. 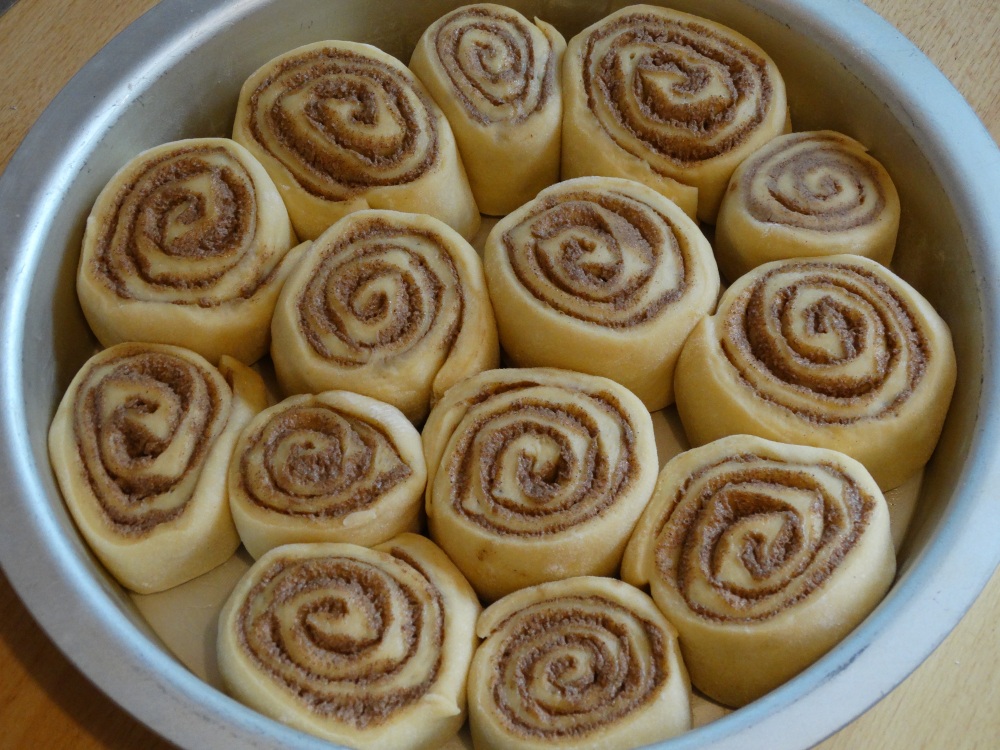 Cover again and leave to rise for at least half an hour more or until the rolls have doubled in size. 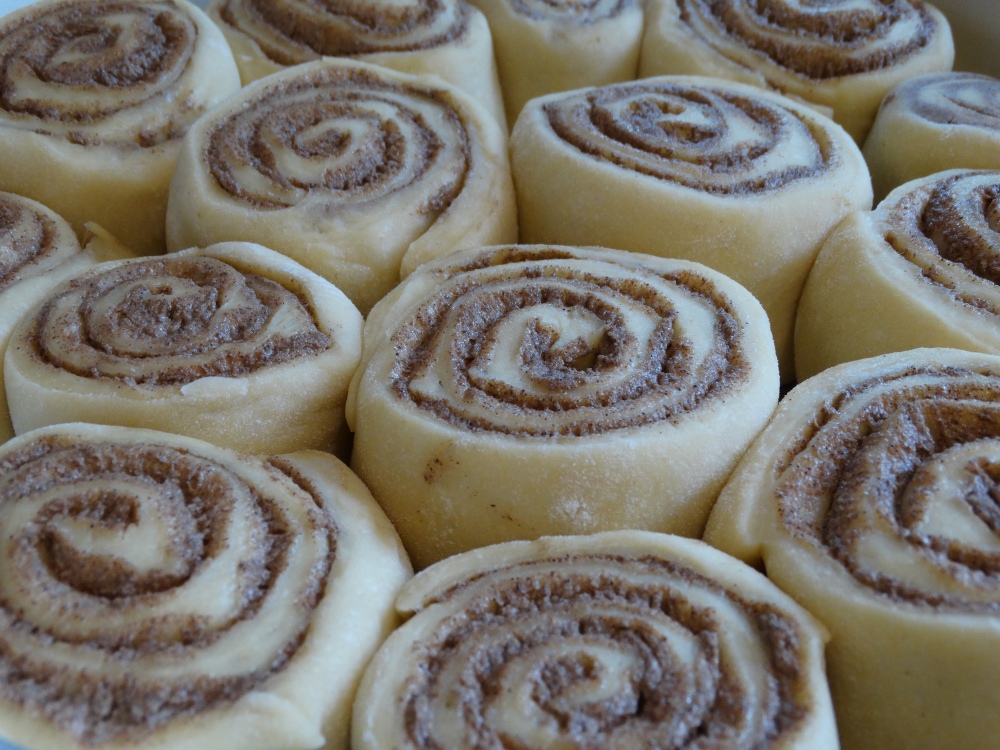 Bake the cinnamon buns for 25 minutes. If they start browning too much, cover them with silver foil to stop them darkening any more.

Allow the buns to cool in the tray for about five minutes before turning them out onto a cooling rack. You may have to invert them onto a tray and then back onto the cooling rack as they are very soft and you don’t want to tear them.

Sift the icing sugar into a bowl.

Add a tablespoon of milk and mix to make a thick paste. If the icing sugar is too thick, you can add more milk but be careful not to make the icing too runny.

Spread of pipe the icing over the still warm buns. The heat will cause the icing to be absorbed more and flow into all the cracks and divots of the buns.

These can be served either hot or cold. They are so delicious however they are eaten.

If you are a fan of fun bread, why not try making some bagels? You can make them cinnamon flavoured too…

Have a good one and I will be back next week with a dish which is far easier to make than you would expect!