With this cake, I have finally cracked two problems I have had whilst baking: how to get a level cake (which doesn’t dome) and how to get the cake to fill up the tin fully. Obviously these two problems are linked. The answer to how can you make the best cakes includes a healthy amount of chemistry along with a substantial quantity of thermodynamics.

In order to understand how to get the best end result, we must first ask ourselves the question: why do cakes rise? For a standard sponge cake (which is what I am addressing here) there are two raising agents. One is a chemical one (that is: baking powder) and the other is the air beaten into the cake. For the sake of simplicity, I am going to start with the baking powder. Traditional baking powder contains two ingredients: bicarbonate of soda and a weak acid (commonly tartaric acid which is also known as cream of tartar). There will normally be some kind of buffer (like cornflour) which will prevent the acid and the bicarbonate of soda from reacting with each other until the cake is in the oven. Once the temperature hits 60°C the baking powder activates. The acid and the base react to produce carbon dioxide and this gives the cake lift causing it to rise.

Most baking powders today have a second acid added to them. This causes a fast-acting reaction at room temperature with the bicarbonate of soda when they are mixed into the cake batter. The ratio of ingredients in the baking powder is designed so that there is a second reaction in the oven (like the traditional baking powders). These are known as “double acting” baking powders. This first (room temperature) stage is what helps give an even rise in the oven. When gas gets hot, it expands. In this case, if your cake goes from 20°C at room temperature into a hot oven, the gas will expand a lot. By the time the cake has reached 60°C and the second stage of gas release occurs, the gas produced by the original reaction will have expanded by 10%.

Flour begins to thicken and cook at 52°C; if you have a single stage baking powder the cake will dome in the oven massively. This is because the flour in the mix at the edge of the tin cooks before the baking powder releases gas so all of the rise is forced towards the centre of the cake. By using a double acting baking powder the gas in the cake mix at the edges of the tin will have already expanded quite a bit as it heats up, in the oven, before the flour begins to cook. By the time the flour has finished cooking, the gasses will have expanded by just over 20% giving a good rise to the cake.

When you take a cake out of the oven, you can see it steaming, so clearly if the steam is escaping, we can conclude that not all of the gas in the cake is trapped inside, some of it will escape which is why you want as much as much as possible in there at the start of the baking process. As well as using a chemical leavener, the other method to ensure a large cake rise is by beating the butter and sugar into oblivion. During the creaming stage, you beat in lots and lots of air which will expand in the oven when the mixture is baked. You want to do this with a K-beater and not a whisk attachment because it is very difficult to over beat the butter and sugar with the former. If you use a whisk and beat in too much air, then the cake will expand and rise in the oven too quickly as it will puff up, the gas will escape before the flour cooks and traps it and the cake will deflate in the middle and collapse. This is possibly the only thing worse than under-beating and ending up with a domed cake.

If you follow the recipe below, you will not have any problems with your cakes. You may need to alter baking times/temperatures a little for your own oven but I trust that you will know how to adjust that better than I would! Let me know how these cakes turn out for you if you have a go at them.

In the bowl of a stand mixer with the K-beater attachment, cream the butter and sugar until light and fluffy (at least five minutes). It is really important to cream these properly as the air incorporated now will help the cake rise. DO NOT SKIMP ON THE BEATING TO TRY AND SAVE TIME.

Add the eggs one at a time beating each one until it is fully incorporated. Make sure your eggs are at room temperature as this will help them mix in. After the fourth egg, the mixture may split and curdle – this is fine as everything will come back together I promise.

Add the flour (and baking powder) and mix together on slow until the batter is homogenous. You do this slowly to avoid overmixing the batter which would cause gluten build up from the flour and also knock the air out of the mix.

Pour in the coffee and milk and slowly beat again until it is mixed through.

Divide the batter between the pans and bake for 25-35 minutes. My oven at home is a little temperamental so baking times can vary a lot. Knowing your oven will help will this but sometimes, you will just have to play it by eye. The cakes will be golden on top, nicely puffed up and a skewer inserted into the centre will come out clean when the cake is cooked through.

Remove the cakes from the oven, leave to cool in the tins for five minutes before turning out onto a wire rack and leaving to cool completely.

Melt your chocolate and set aside to cool to room temperature (don’t worry, I assure you it will not go hard).

Beat the butter in the bowl of a stand mixer for five minutes until it is super light and fluffy.

Add half of the icing sugar and beat for another few minutes.

Add the rest of the icing sugar and beat in for another three minutes to make a super light and fluffy buttercream.

With the beaters on slow, mix through the chocolate and then beat on high again once the chocolate is added to ensure it is mixed through evenly. 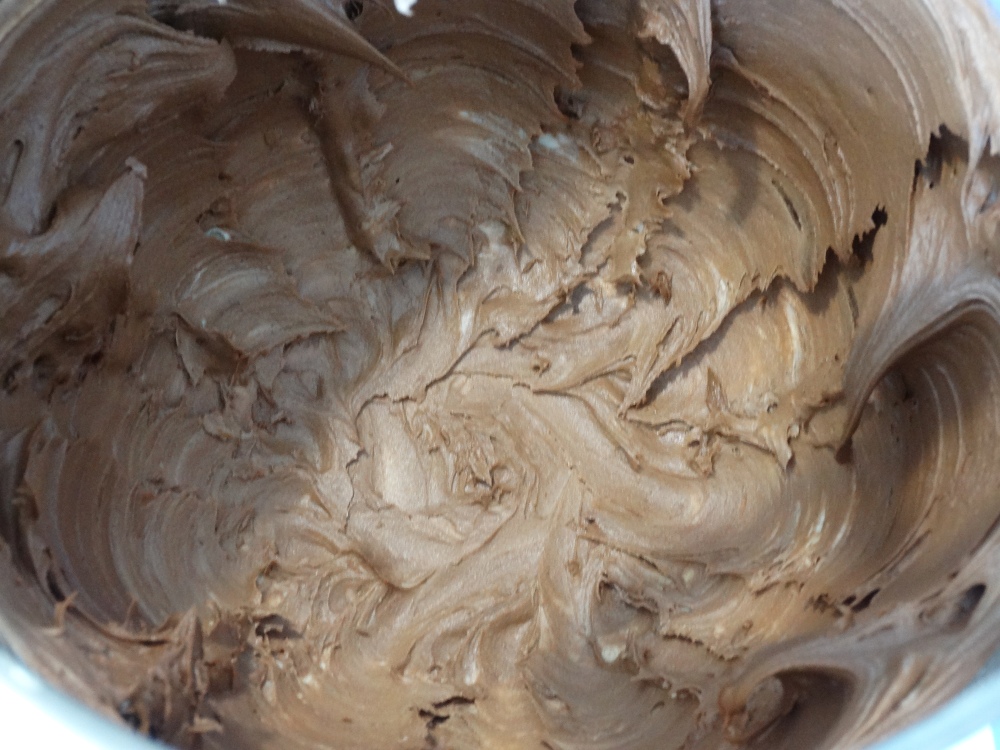 If you want to add a little coffee, now is the time.

To assemble, sandwich the cakes together with half of the buttercream.

Spread/pipe the rest on the top of the cake to decorate. 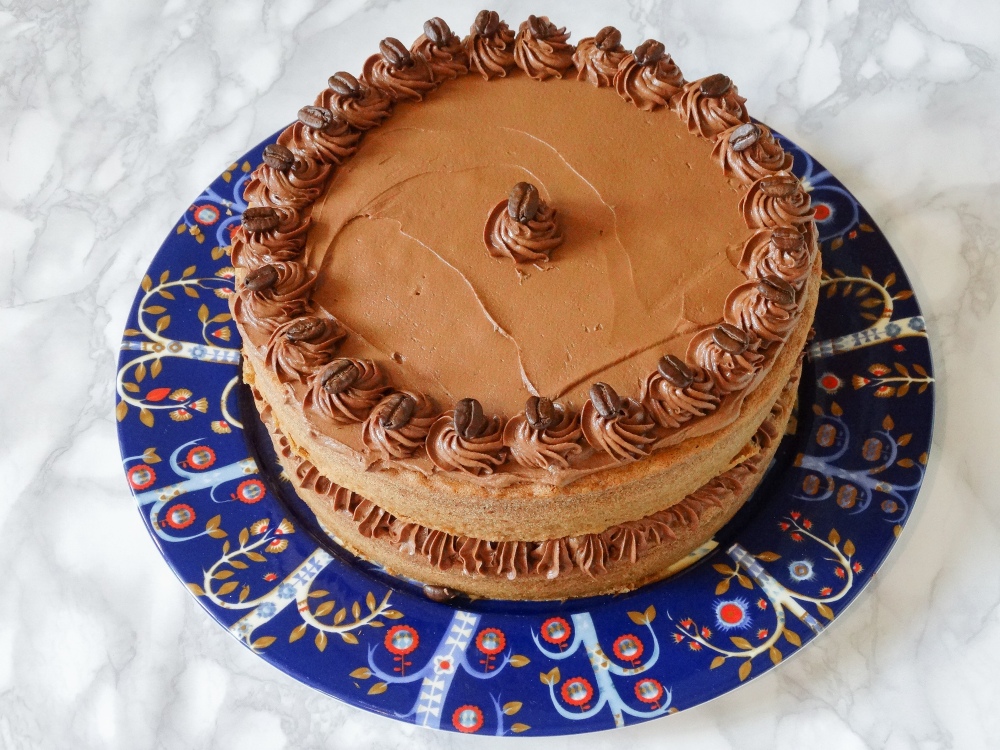 If you want, you could add a few coffee beans on top of the cake to jazz it up a little. 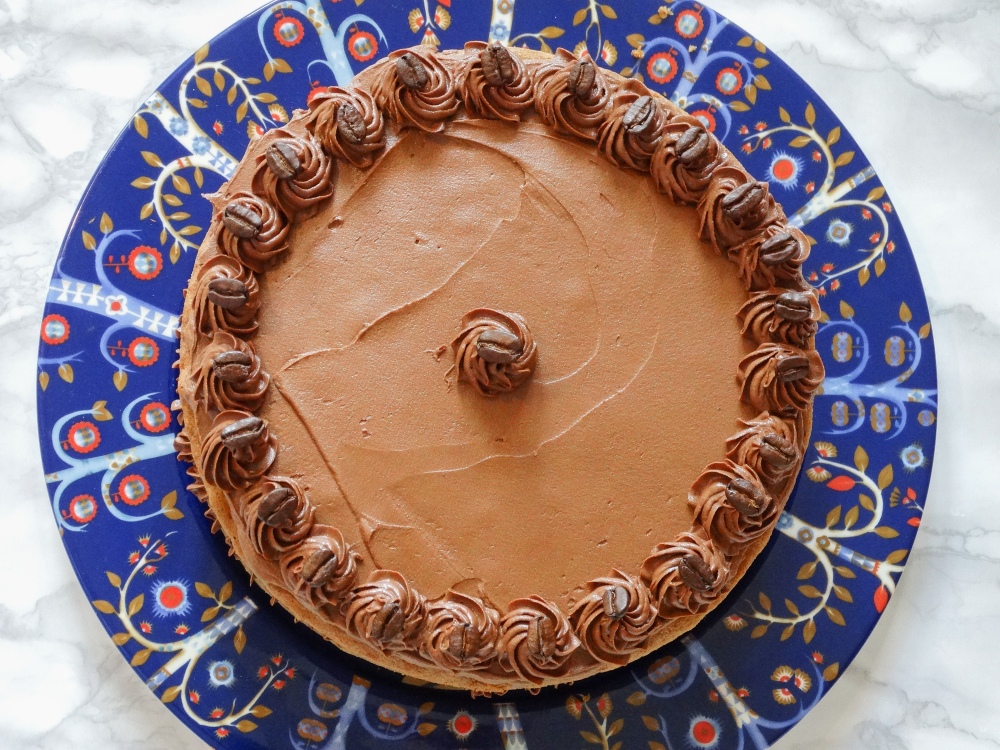 I hope you enjoyed the recipe. If you are a fan of coffee, you have to try my coffee and walnut cake – it is wonderful.

The next two weeks mark the two year anniversary of this blog so expect some amazing food!

Have a good one,