The first thing to note when it comes to BBQ sauce is that the sauce itself does not need to be smoky. In fact, the original BBQ sauces would certainly not have been as they were, quite simply, sauces with which to glaze meat prior to cooking on a BBQ – this of course being where the smoky flavour comes from. Lots of BBQ sauces that you can buy have added smoke flavour (which I am certainly not against, I really like it) because they are aiming to recreate the flavour of a piece of food which has already been cooked. For this reason, I have left the choice of smoked/unsmoked paprika in this recipe up to you. You could also add liquid smoke if you like a particularly potent flavour.

Owing to the nature of what defines BBQ sauce it is very difficult to place a date on when it first appeared. It is very much an umbrella term for a wide range of sauces all with different ingredients and characteristics. The ‘classic’, western, tomato-based BBQ sauce that we know today appeared around the late 1800s / early 1900s, but before that there were plenty of sauces used for glazing and basting, many of which were butter based. These buttery BBQ sauces are still popular in several American states and are a pale gold  colour.

Although the regions and ingredients change a lot between different styles of sauce there is a common theme running through them. Almost all BBQ style sauces are sweet and tangy. This is normally achieved by combining vinegar and sugar. This combination transcends continents and can be seen in Asia with hoisin sauce. Instead of a tomato base this sauce is built upon fermented soybeans (giving a rich umami tang) and contains, among many other things, white vinegar, sugar and salt. Dark brown western BBQ sauce contains tomato (for the umami hit), vinegar, sugar and salt. Even the tomato-free sauces contain vinegar and some sort of molasses for the sweetness and colour. The notable exception is Alabama White BBQ Sauce which is a mixture of mayonnaise, mustard, horseradish and lemon. There are also vinegar free sauces which use citric acid (either crystals or from lemon juice) but the tang from the vinegar is distinctive of a BBQ sauce so these condiments are not for me – I am a huge fan of vinegar based sauces, can’t get enough of that sour, sour tang.

If you are making your own sauce for an actual BBQ, there are a couple of things you should note. Whilst in a slow cooker, you could happily swap honey (which has a very high fructose content) for sugar, this will burn over a BBQ as the fructose begin to caramelize at a lower temperature than sucrose (table sugar). For a real BBQ, I would recommend marinating the meat in the sauce but wiping as much as possible off before cooking to prevent it burning. You can start to baste the meat towards the end of the cooking as the sauce will change flavour as it cooks (our friend the Maillard reaction returns once again). If you really want to use honey in your sauce, try not to add any to the meat until the last second. Maybe give it a quick sear on both sides to caramelize the sugars but the fructose will burn if you are not careful – it may be safer to have the sauce as a dip for the meat once it is cooked.

BBQ sauce is one of those things that is unique to each person who makes it. Feel free to play around with the recipe – add more spices, take some out, mess with the proportions – because everyone has a different palate. The first recipe I used was simply far too sweet for me but some people like it sweet and other like it sour. Let me know if you change it up and how it goes – I would love to give your version a go!

1 cup tomato ketchup – try and use a brand that isn’t too sweet, you can always add more sugar if you want it but you can’t take it out

Tip all of the ingredients except the chicken into a slow cooker and stir together. 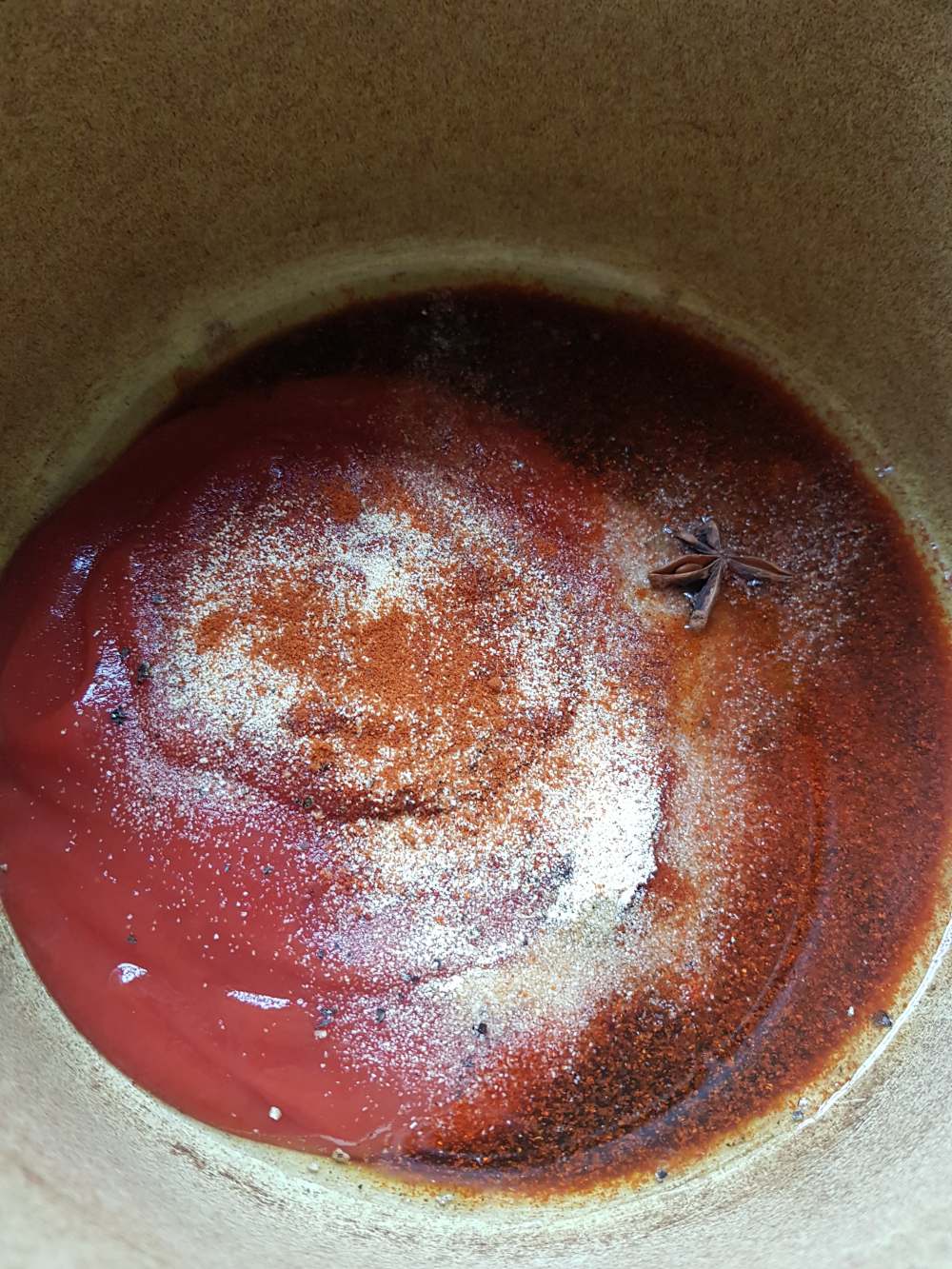 Add the chicken and cook on low for six-eight hours. You do not need to take the chicken off the bone. 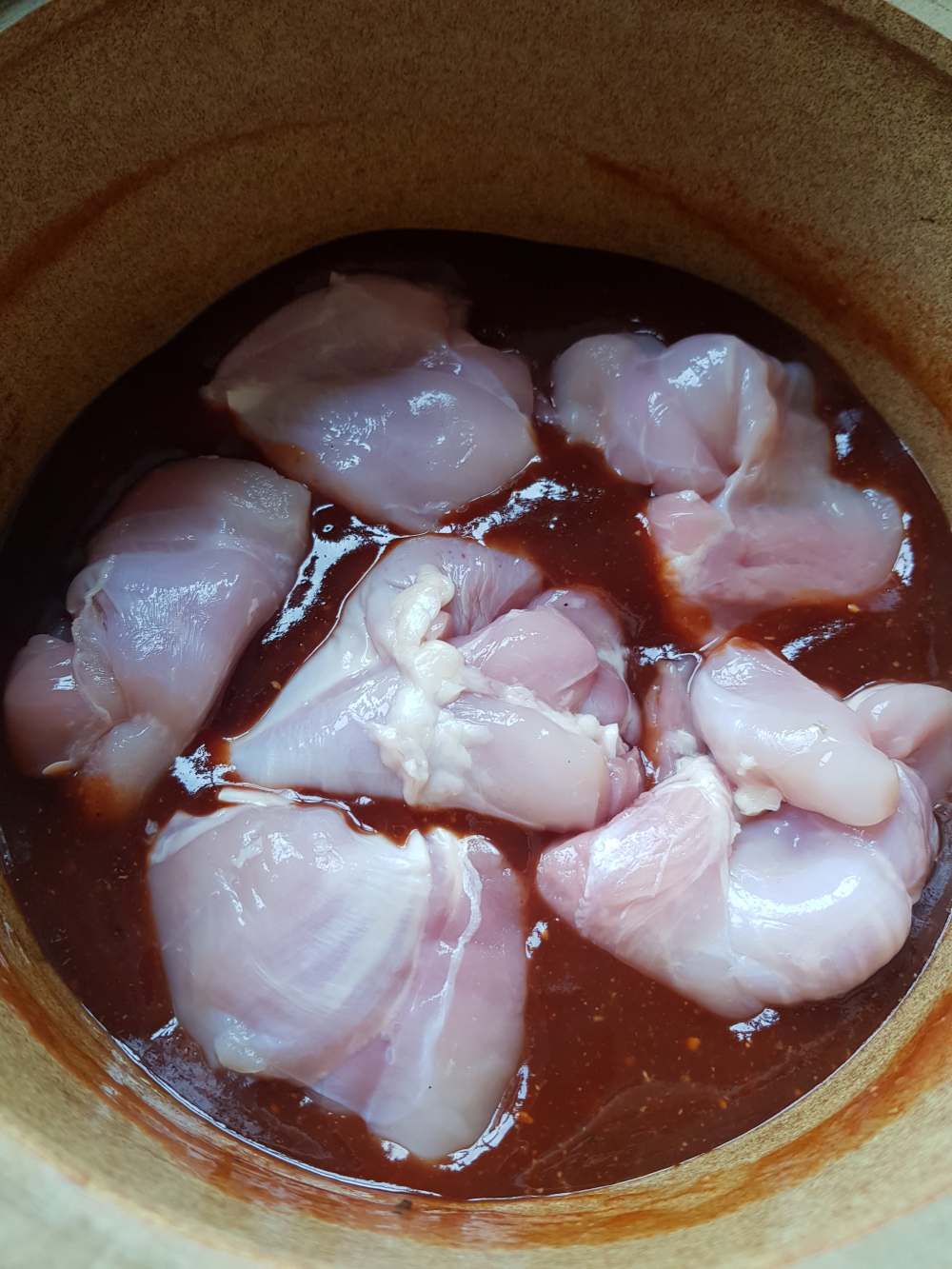 Once the chicken is cooked, remove it from the slow cooker and use two forks to pull the chicken into chunks. It will tear down the muscle fibres so you will get the best “pulled” chicken effect from chicken breast as it has the largest single chunks of muscle but if you just want BBQ slow cooked chicken, any will do. Any chicken that was on the bone will come off easily. 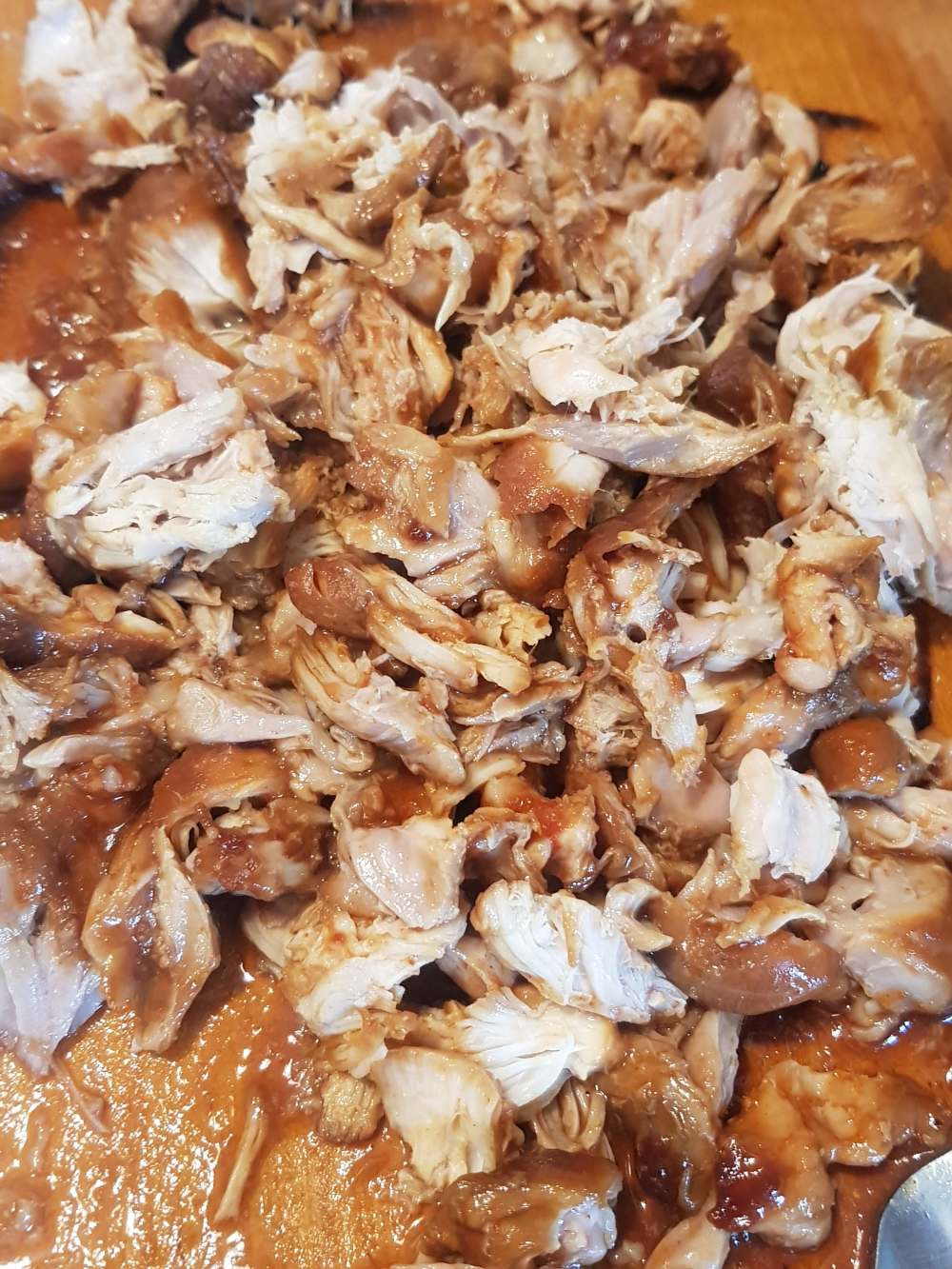 Put the pulled chicken back into the sauce and stir it through. Allow to reheat for ten minutes or so. 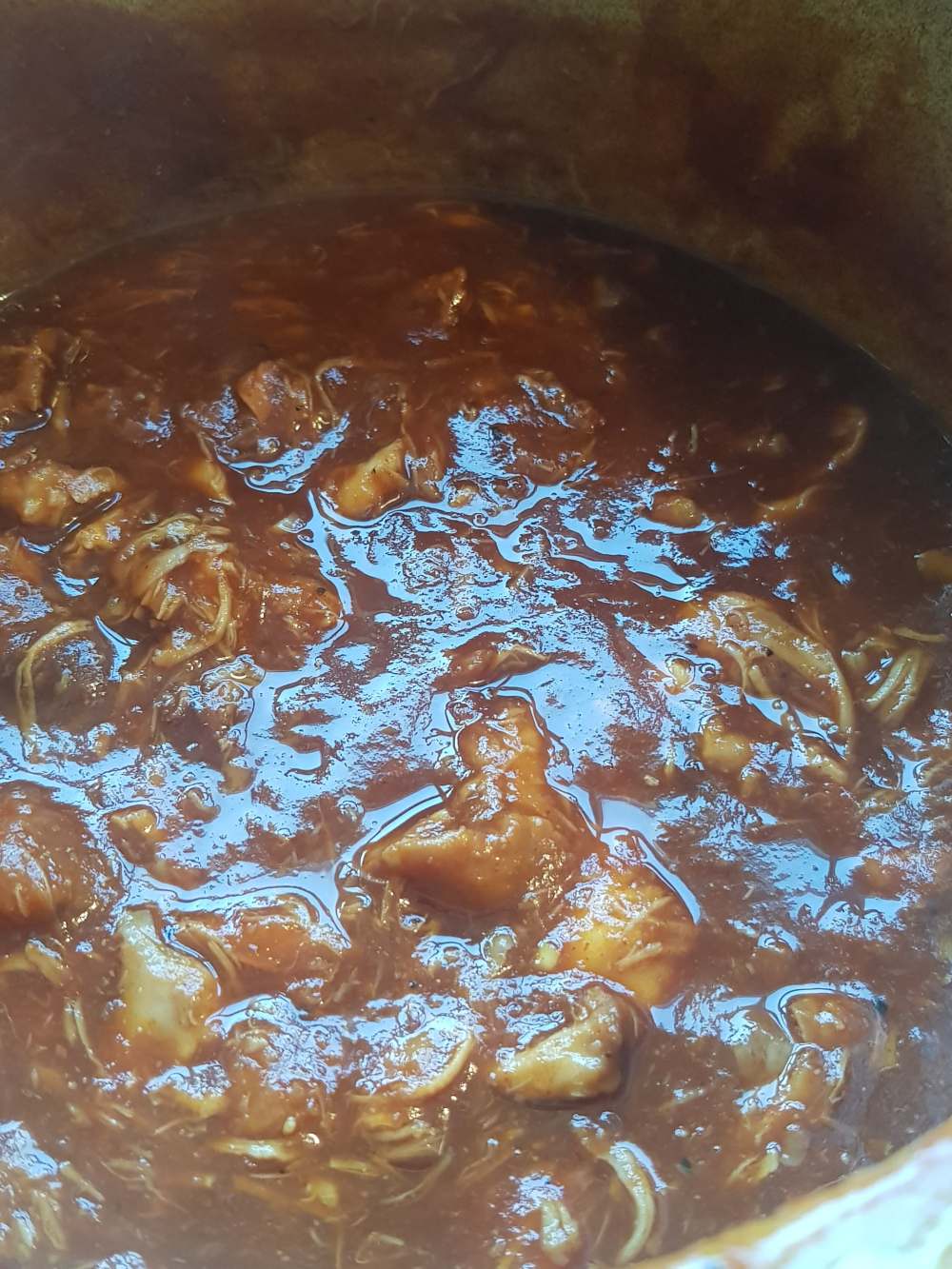 Serve in a bun with salad and cheese should you want them. I particularly like it with lettuce and spring onion. The pulled chicken can also be used to top nachos, potato skins or even rice bowls. 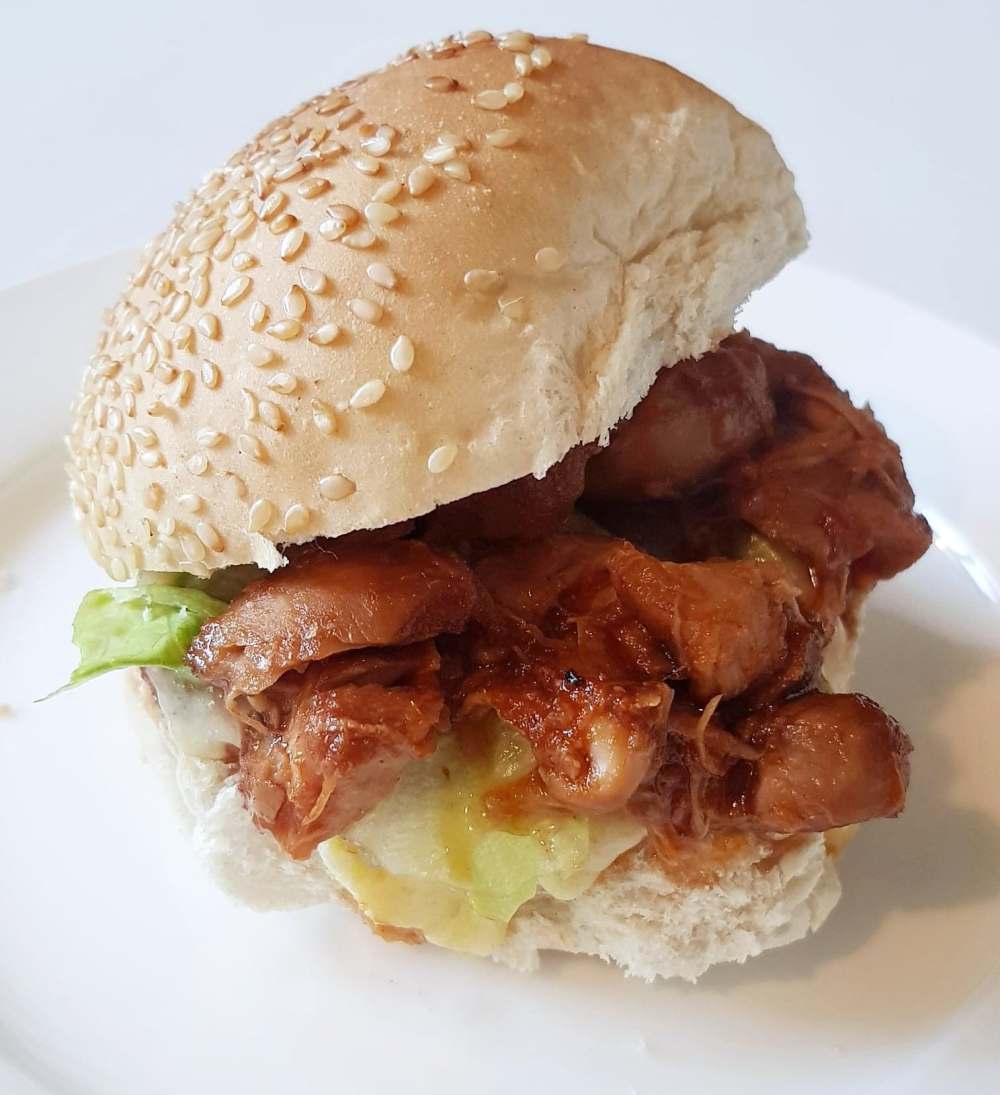 Let me know if you want me to do more slow cooker and crock pot recipes, they are super easy meals and taste so delicious.

Have a good one and I will be back next week with a recipe for a delicious cake inspired by one of the most controversial confections in English history.