Hey guys, I’m back with another instalment in my baking series. Last week I talked about the traditional Coffee and Walnut Cake and this week we are looking into at beautiful artisan loaves.

I love baking bread. It is an incredibly therapeutic activity especially as I am a student and I stress bake and few things make me feel better than having beaten a slab of bread dough into submission for ten minutes or so. Bread isn’t very difficult to make but a lot of people end up eating the same breads over and over and sometimes it can be exciting to jazz it up a bit.

I came across the idea for this recipe when my friend send me a video compilation of various breads being scored and baked. It was a very satisfying video to watch but the main thing that caught my eye was this one bright pink loaf with an amazing floral design scored into the dough. It set me thinking about how I could recreate this myself. I wanted to avoid using artificial dyes which I was successful in doing and thus the beetroot bread was born. I did forget to put salt in the first time but luckily, it didn’t taste too wrong – the second attempt (this time with salt) was a definite improvement.

I was disheartened to discover that although there are many recipes for beetroot bread on the internet, they were not the most useful and they were all very different, no prevailing theme to make it easier to adapt at home so I decided to just go for it and throw in a blended beetroot to my standard bread mix and lo and behold, it worked! This got me thinking about other vegetables that could be used to make jazzy and colourful loaves and after a very fruitless search online, I chose to go ahead and see what would happen if I put spinach in instead. Thankfully it worked and the result, while not as striking as the beetroot bread on the outside, was a definite winner. 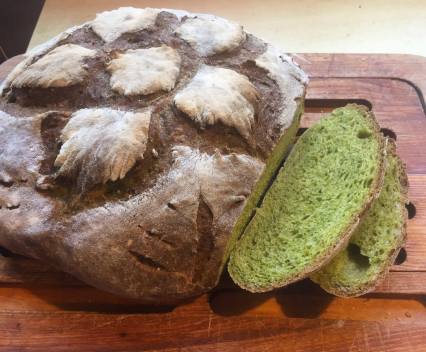 These recipes could be easily adapted to make colourful pizzas for a party, small rolls for burgers or even to make hollowed out rolls for serving soups in at a fancy dinner party. Their versatility makes the breads very useable in pretty much any culinary situation (that you would want bread in) and especially exciting if you are trying to make something brightly coloured without using food colourings.

I will be experimenting further with these ideas to see what other breads can be made with vegetables and it seems to be a rather uncharted territory at the moment.

I hope you enjoy making these yourselves. As always let me know what you think of them as I like knowing your opinions on these recipes. If you have any vegetables you think would work and want someone to try them, I am always up for a good challenge!

The first thing to do is to make up the liquid part of the recipe.

If you are using beetroot, peel and roughly chop the beetroot and place into a food processor with a quarter of a cup of water and blend until you have a paste (it will still be a little lumpy as the beetroot is so hard).

For the spinach bread place the spinach and a quarter of a cup of water into the food processor and blend to a paste.

Make the vegetable paste up to just over 400ml with cold water.

Place the flour into a bowl and pour the yeast, salt and sugar around the edge of the bowl.

Make a well in the centre and pour in the liquid.

Use a spoon to start mixing the dough together.

Once it starts coming together, pour the mix onto a surface and knead for about ten minutes or until the dough is smooth and elastic. 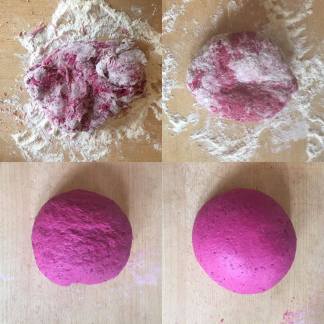 Place the dough into a lightly oiled bowl, cover with cling film and leave to rise until the dough has over doubled in size – about two hours. 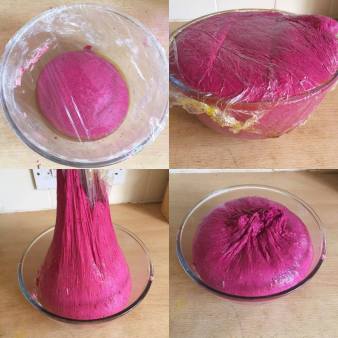 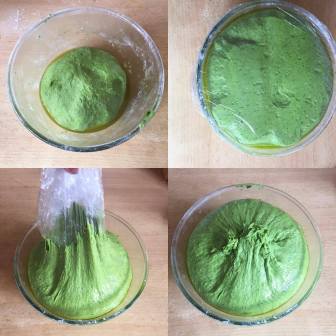 Once the dough has risen, pour it onto a surface and knock it back (knead it again for about 30 seconds).

If you don’t have large banneton you can make one by placing a dishcloth into a large bowl and liberally sprinkle with flour.

Pull the dough tight into a ball and place into the bowl and cover with a cloth and leave to rise for another 45 minutes or so.

Flip the dough out onto a lined tray and remove the bowl and cloth.

Score the dough to control how it rises. How you do this is an entirely personal choice! Traditional scoring is diamonds across the top but I like to go a bit fancier with these breads. I would advise going with a symmetric design as it will cause the bread to rise symmetrically in the oven but this is a purely ascetic choice.

Traditionally, scoring is done with a sharp blade called a lame. It is effectively a small razor on the end of a stick and can be dither curved or straight. I was lucky enough to discover my local cooking shop sold them for about £3 but up until this point, I had just used a standard kitchen knife which would work just fine. A lame may make the curved shapes easier to obtain though.

Bake for 20 minutes. Turn the bread and bake for another 20 minutes to ensure an even crust. The bread is done once it sounds hollow when the base is tapped. If in doubt, give it a few more minutes!

The spinach bread will gain a dark brown crust while the beetroot will be similar but the areas where the scoring was will be a deep purple colour! The beetroot bread will change colour inside during the baking too so the final result is a dark red as opposed to the aggressive pink of the dough! 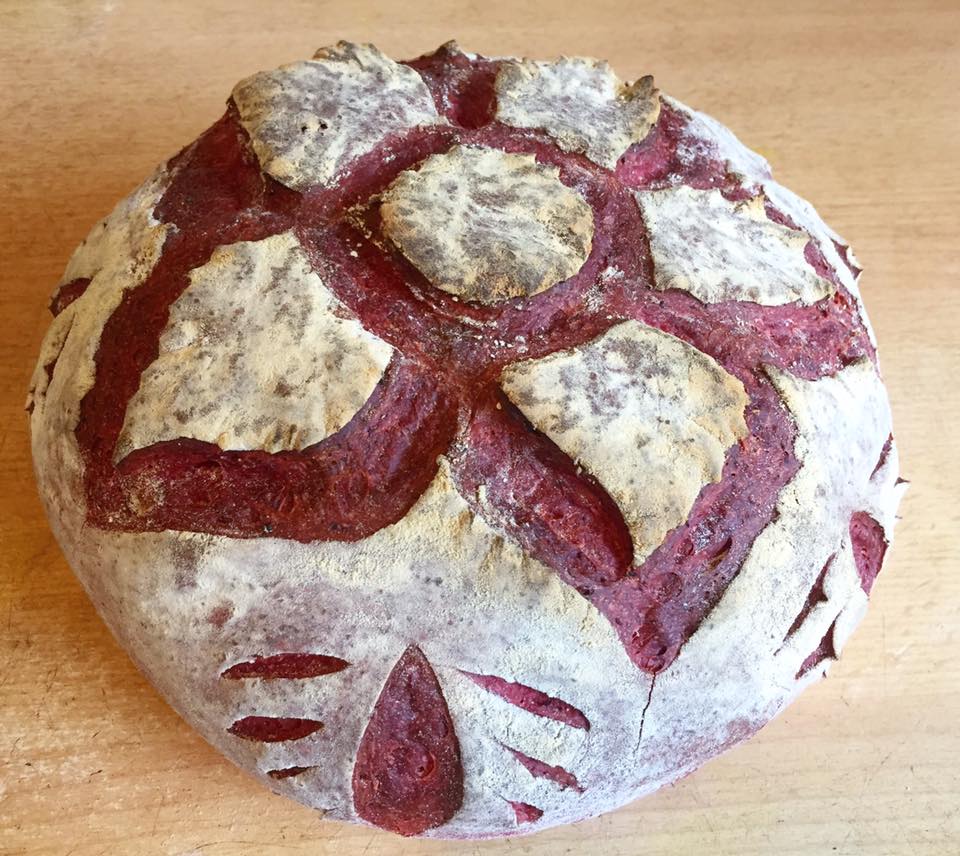 These breads are great for taking a gift or eating with a cheeseboard as they are a little more exciting than a standard loaf. The addition of the vegetables does not significantly change the taste of the bread which means they can be used for savoury or sweet toppings so the loaves are also very versatile in their uses.

If you have a go making either of these, let me know how it goes in the comments especially if you manage to snap a photo. I love seeing what you guys have been making and it makes me really happy to know that you are enjoying my recipes – for more baking ideas see my instagram thatcookingthing.

Join me next week for another instalment of my Cooking from Basics series, see here for last week’s bolognaise recipe and I look forward to chatting with you guys soon!