For such a bland ingredient, I find it fascinating that pumpkin has a whole dessert dedicated to it. That being said, the predominant flavour of a pumpkin pie is a sweet, spiced custard. This is not a bad thing in my eyes. The pumpkin is mainly there as a medium to keep the sugar and flavours in one place after the pie is cut open – a job that it does magnificently.

A classic problem most people face with a pumpkin pie is the dreaded crack. This is no Madeira cake, where you want the filling to bubble up from within like lava leaking from a volcano, this is a beautiful glossy pie with a smooth flat top. The reason that pies crack is overcooking – specifically overcooked egg. This is, of course, a problem as the egg is what causes the filling to set and gives the melt in your mouth, custardy texture. As an egg cooks, the proteins inside it tighten and cause it to shrink. Anyone who has fried an egg will have seen how the edges pull in ever so slightly as they cook, giving a slightly smaller, thicker end result than one would otherwise get. This phenomenon, when spread over the entire width of a pie, can do irreparable damage which can be hidden by whipped cream but will always be there.

“So how”, I hear you shout, “can I stop my pie from cracking?” There are two easy solutions. One: do not overcook the pie, the eggs should be just set and the centre of the pie should be slightly wobbly when it is taken out of the oven. Two: replace some of the egg white with egg yolks. In the recipe below, you will see that there is only one egg white whilst there are four egg yolks. The yolk cooks at a slightly higher temperature than the white of the egg and also shrinks far less if overdone. That is not to say that this solution will ensure perfection every time – everyone messes stuff up occasionally. What this does do however is give you a larger margin of error on your pie. With such a high specific heat capacity due to the fat content, the pumpkin pie will take a good few hours to cool. Leave at least four if you are serving it that day. In this time, the latent heat inside the pie will finish cooking the centre. I should note that we aren’t talking about a small central area here, you should be envisioning a solid four-inch-wide circle in the middle of the pie which appears sunken when the pie comes out of the oven. The puffed-up edges will deflate as the pie cools and the centre will firm up. If your pie is fully cooked through when you remove it from the oven, it is almost guaranteed to crack as it cools if it has not done so already.

All that doom and gloom aside, these pies are celebratory. They are a celebration of the harvest and one of the foods which Americans can proudly call their own. The first recipes for sweet pumpkin pies appeared during the 1800s and their popularity has grown ever since. After the civil war, pumpkin pies were rejected by many southern areas as a way of renouncing what they saw as a Unionist tradition being forced upon them. In retaliation, many people ate sweet potato pies or included pecan nuts and bourbon in their pumpkin pie recipes to separate their pies from the classic “yankee” pie. Nowadays, it is traditional to serve a pumpkin pie as dessert after the Thanksgiving meal but they can, of course, be eaten at any time of the year.

I hope you enjoy the recipe as much as I did – I will certainly be making this again.

To make the pastry, cube the butter and rub it into the flour until it resembles fine breadcrumbs.

Stir through the salt and sugar. 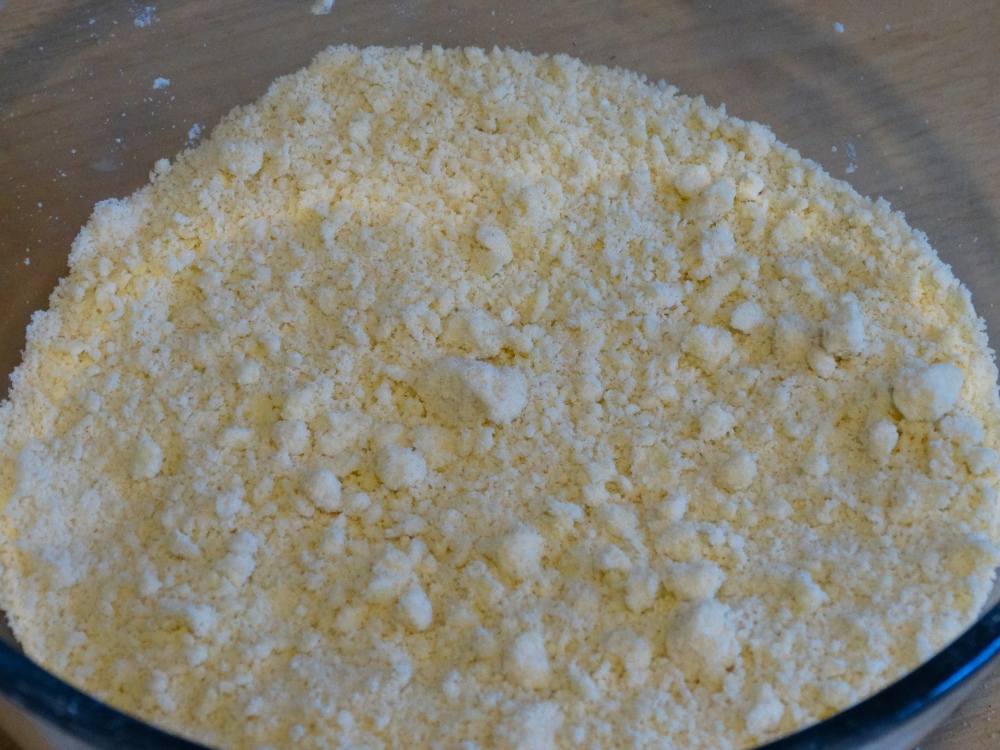 Add half of the water and stir with a knife until the mixture begins to come together. If it is still dry, add more of the water. 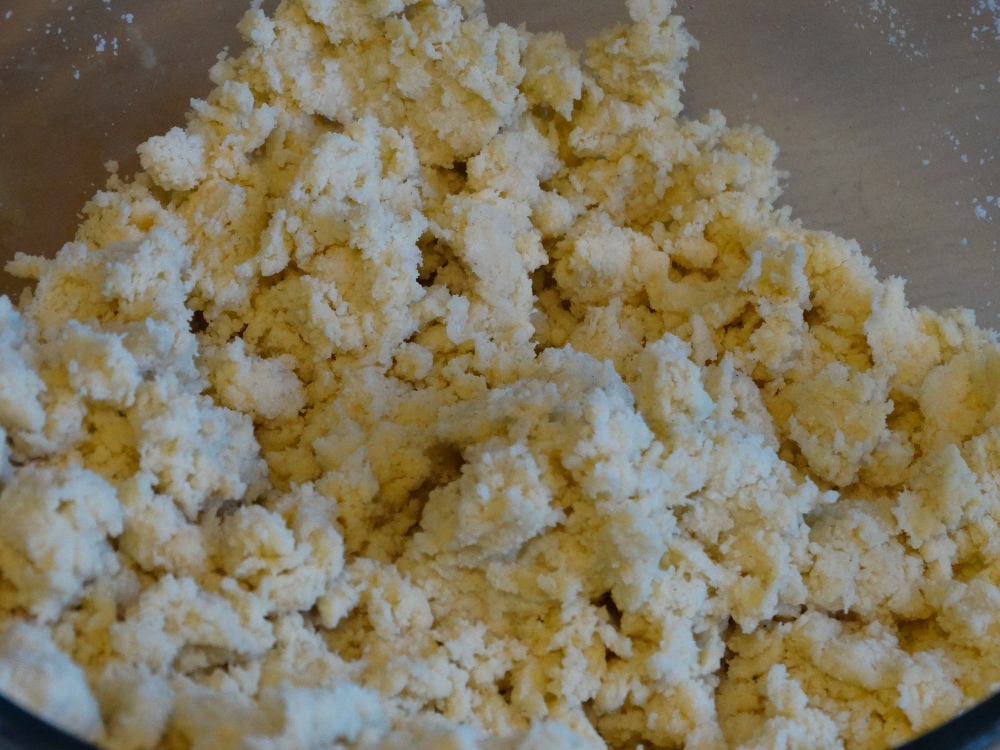 Once the dough has started forming into pieces, tip it out onto a workbench and knead it together into one ball. Try to work the dough as little as possible.

Flatten the dough into a thick disk (about 2cm high) and wrap it in cling film before placing it in the fridge to chill. 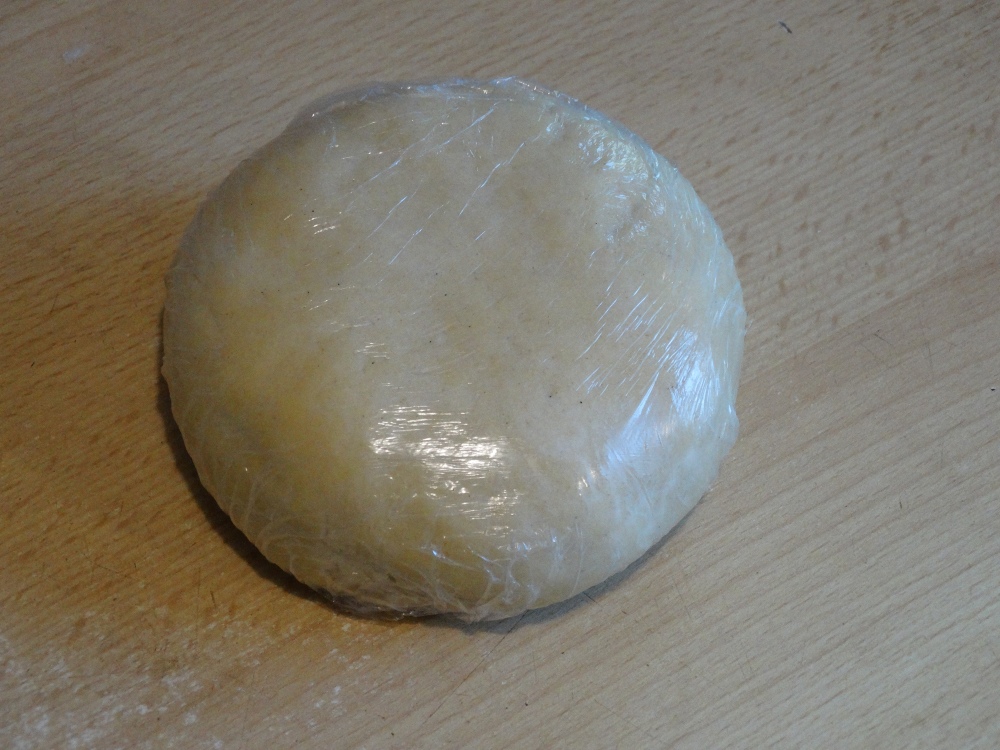 In a large bowl whisk the egg and extra yolks into the pumpkin puree. 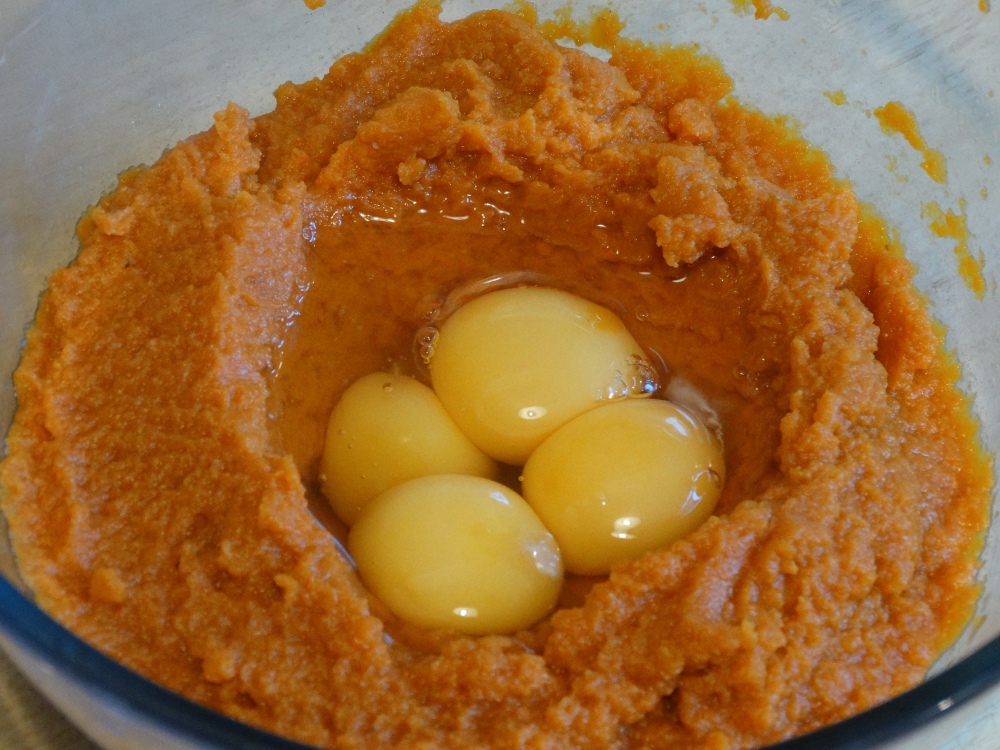 Whisk in the spices, salt and then the condensed milk. 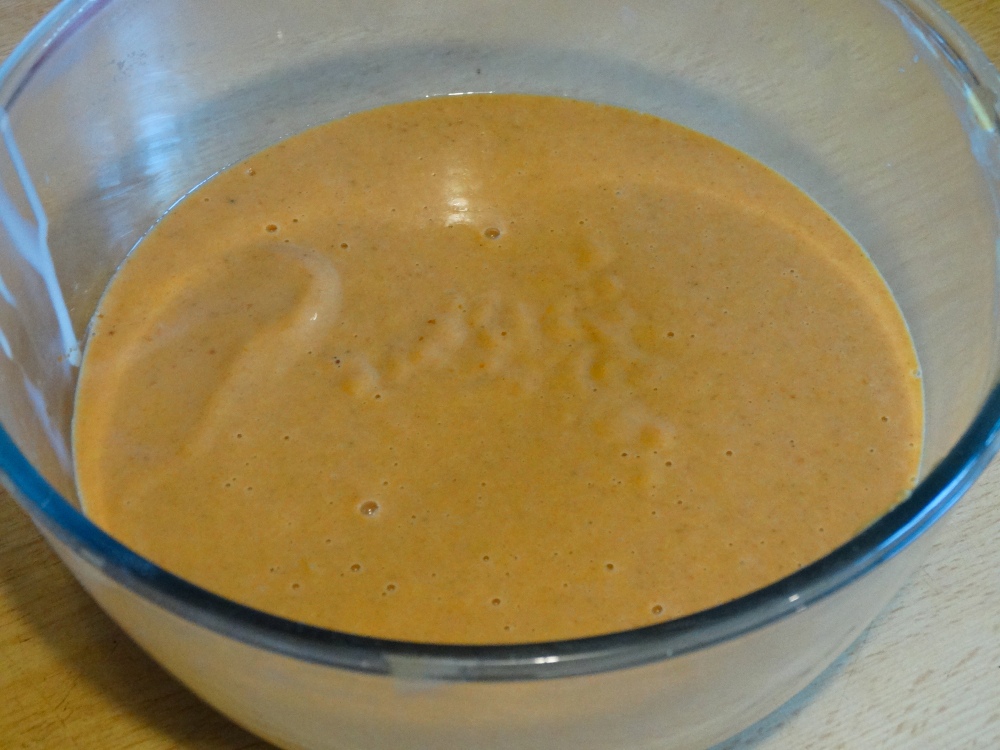 If you don’t have Chinese five spice, you can substitute it with cloves, star anise and ground pepper, I don’t have these in ground form at home so had to grind them by hand in a mortar and pestle. It doesn’t take that long but you have to remember that a pepper grinder like the ones you would use at dinner will not grind the pepper enough for this recipe. You do not want lumps of pepper in your pie!

Roll out the pastry and line the pie dish with it. 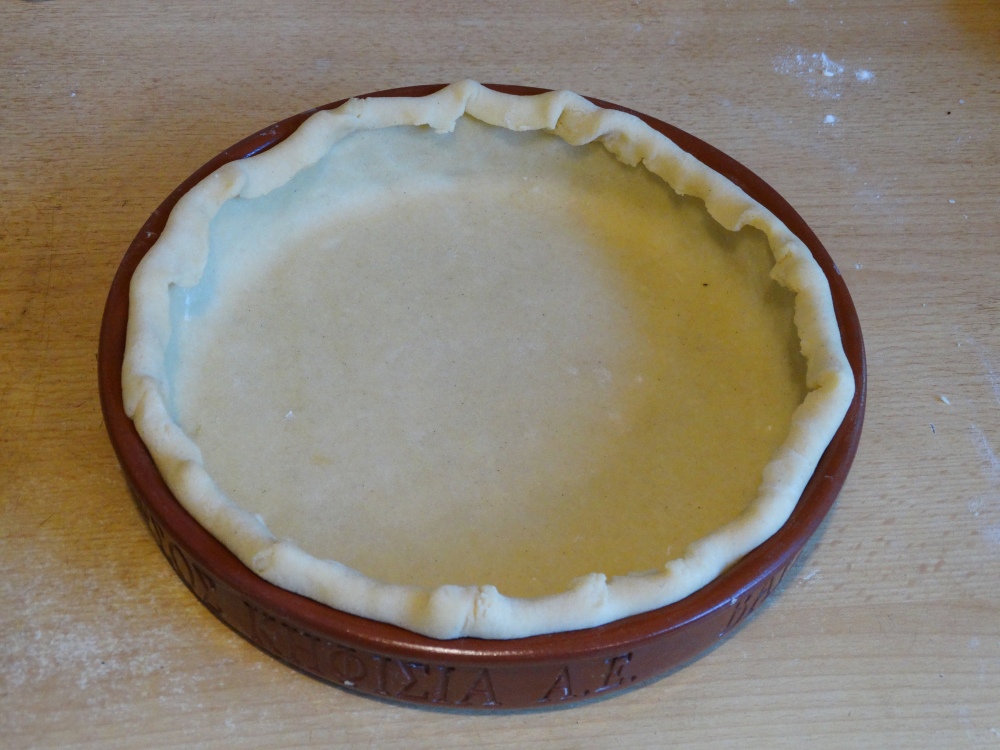 Fold this overhang back side the pie and press it into the top edge, this will give you a thick rim which you can crimp.

To crimp the rim of the pie dish, one finger of your left thumb and your right thumb and forefinger to press the edge of the pie into a little divot. Repeat this around the whole pie to get a beautiful edge.

OPTIONAL BUT RECOMMENDED: Using foil and baking beads, blind bake the case for around ten minutes. This will help avoid a soggy bottom late on, you don’t need to bake it for long as it will have another 45 minutes or so in the oven to crisp up but I have found that if you do not blind bake this, although fully cooked, the pastry can be a little bit soft.

Pour the filling into the pastry case and place back into the oven for 15 minutes. 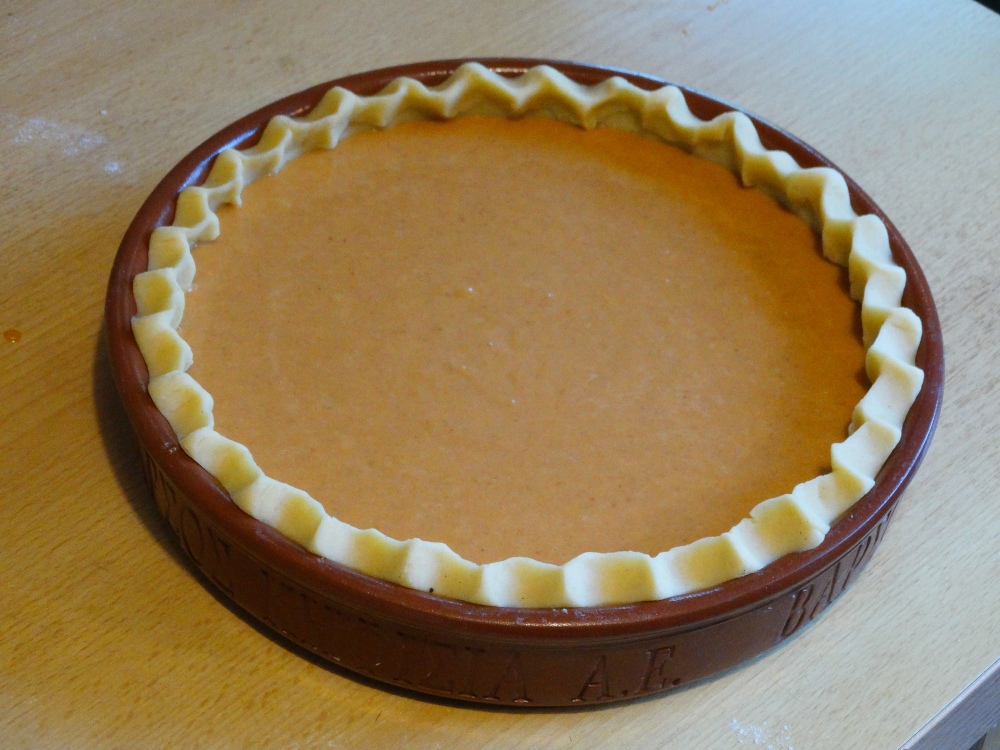 Turn the oven down to gas mark 3 (170°C) and bake for another 30-40 minutes. When fully cooked, the pie should be just set in the middle and a skewer inserted an inch away from the pastry case should come out clean. 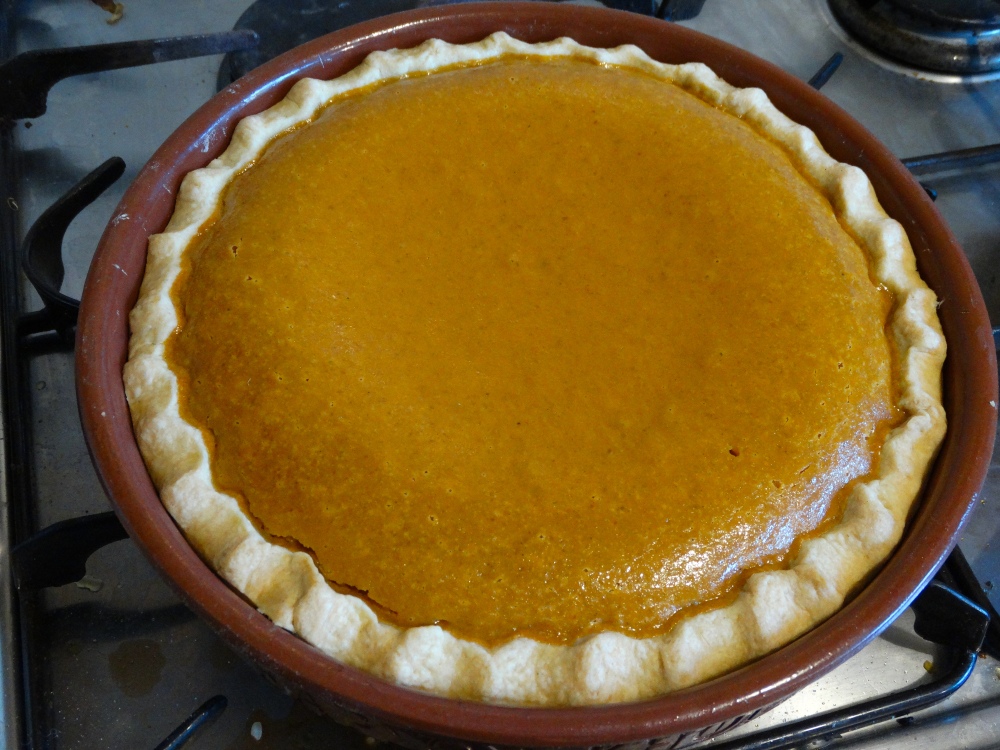 Allow the pie to cool completely before serving. 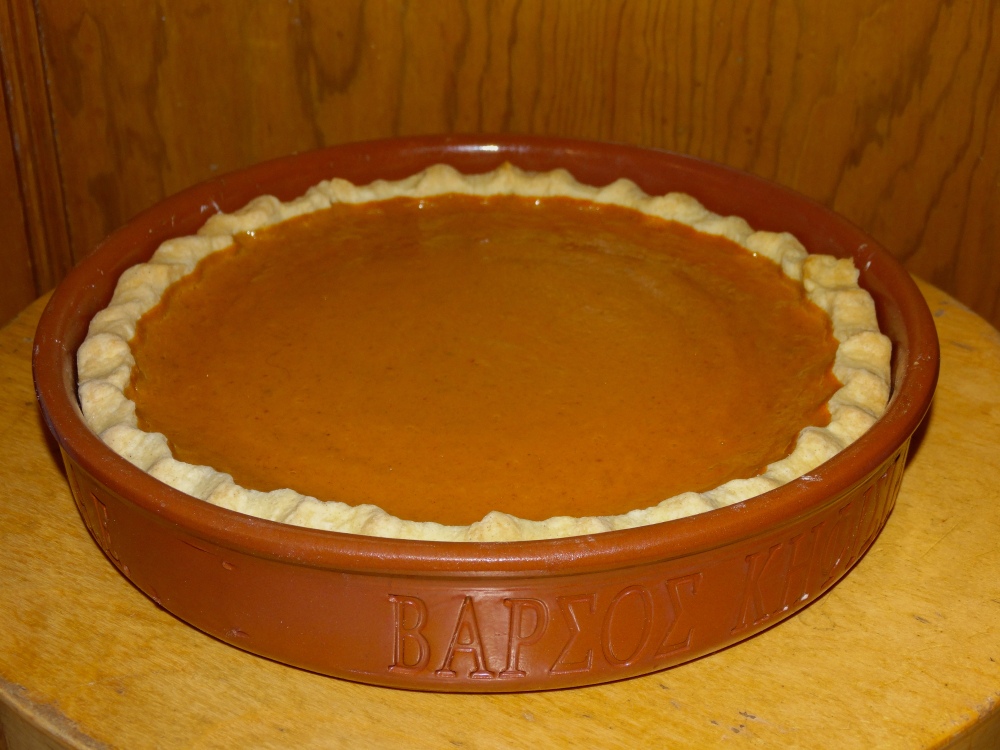 As usual, the first slice may be a little problematic to get out but after that, all slices of pie will come out beautifully and taste amazing – just remember to loosen them underneath with a knife or offset spatula before you try to lift them off the plate.

Serve with lightly whipped double cream and a sprinkle of ground cinnamon. You do not need to add any sugar or flavouring to the cream as the pie is sweet enough already. 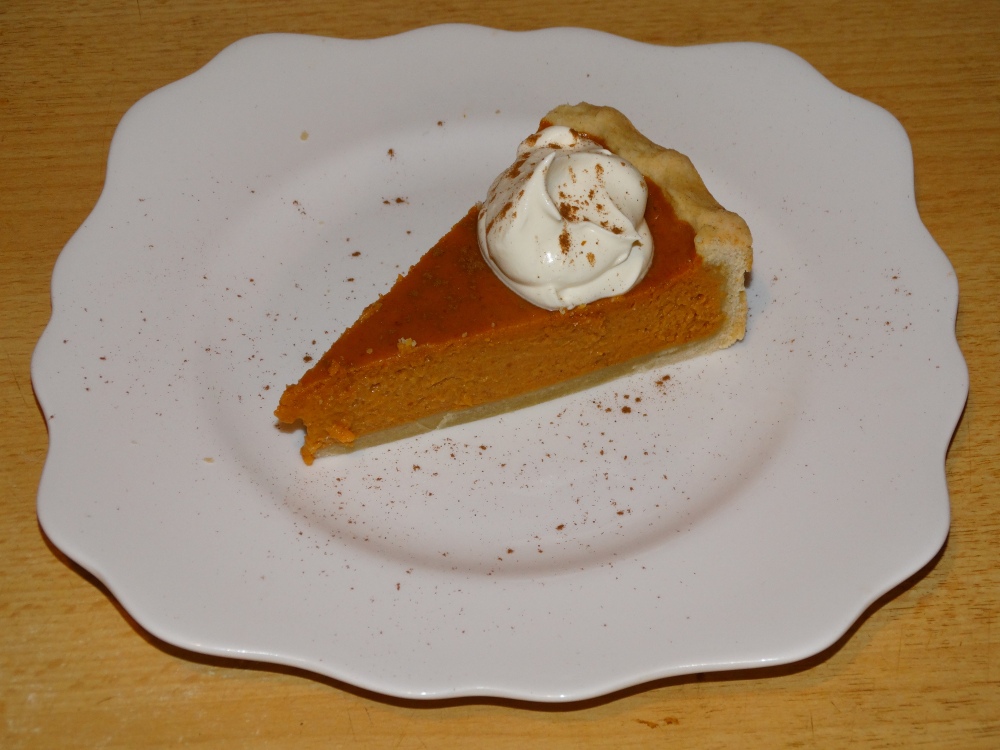 The flavour of this pie is gorgeous and its custardy texture is ultra smooth and creamy. It is simply divine. Of course, not everyone likes pumpkin pie and if you are one of those people, why not try making my raspberry and white chocolate pie – or maybe ever a quadruple chocolate and salted caramel one? If, on the other hand, you are looking for something a little bit more savoury, why not try making a flavourful hot water crust chicken pie? It’s sturdy enough to survive in a lunchbox and just a good cold as it is hot.

Have a good one and I will be back next week with another meal idea.