About a year ago, I went out for lunch with my mum to the Bang Bang Oriental Food Hall in north London. I cannot remember what I had to eat (possibly dumplings, a Thai curry or pad Thai?) but my mum has a bowl of bibimbap. This came with a side of chilli sauce for dipping which was unlike any other chilli sauce I had before – and it was delicious!

Fast forward a few months and I come across gochujang in the newly refurbished world food section of my local supermarket. This was it! I had finally found this unnamed chilli sauce that was simply divine. So what is it that makes gochujang so amazing? Most chilli sauces contain heat from the chilli and then some sort of sweetness and some sort of acid – normally vinegar. This combination floods your taste buds and sets them off all around your mouth. Gochujang still has the heat and the sweetness but, instead of the vinegar, you have the natural acid from the chilli. Coupled with this there is also a powerful hit of salt and umami coming from the fermentation which several elements of the sauce undergo during production. This means that gochujang is hitting all of the flavour sensors in your mouth, the salt is making you salivate, the chilli is making you sweat (if you get a spicy one) and overall your palate is having a great time.

Pepper paste has been eaten in Korea for well over five hundred years– maybe even a millennium if you believe some sources. After the introduction of chillies (which come from America) in the 1600s the pepper paste began to change. There are mentions of gochujang from the 18th century and very little has changed in the production of traditional gochujang since then. The primary ingredients are glutenous white rice, fermented soy beans and chilli powder. Other things are sometimes used such as barley, sweeteners like sugar and honey and there are even recipes which include sweet potato on the ingredient list!

For me, gochujang can be used as a primary flavour of a dish, not just as something to add some heat. Don’t get me wrong, I love sriracha and sweet chilli sauce but I would not use them as a main ingredient. They don’t have the depth of flavour that fermentation brings and as such, in this situation, must be relegated to the use of condiment, not the showcased ingredient.

The sauce for this recipe is amazing! It is spicy, salty and has enough sweetness to balance everything out. It can be used for stir fries, marinating meat or tofu or even just as a side dish for dipping – it is so versatile! The noodles which go with the gochujang chicken are lightly flavoured (so they aren’t boring) but are not there to outshine the main star of the dish. I have also taken the leftovers for lunch the next day (although I would recommend cleaning your teeth afterwards if you have to be around other people).

Serves: 3-4 (depending on the quantity of noodles)

4 boneless, skinless chicken thighs (you can do this yourself but I would not be able to explain well – the internet and videos would be better)

Sauce of your choice – I used a mix of soy, sesame oil, honey and chilli oil

Take your deskinned, deboned chicken thighs and bash them with a rolling pin to flatten them out a bit – you don’t want to pulverise them or reduce them to a mush, just flatten them out so all parts are the same thickness. Place them into a bowl.

In a separate bowl mix together the gochujang, honey, miso, sesame oil, garlic and water until a smooth sauce is formed.

Pour a quarter of the sauce over the chicken and toss the chicken until it is all covered.

While the chicken is marinating, prepare the noodles.

I have not given quantities of the stir fry ingredients because everyone likes different things – this is what I put into my stir-fry but I don’t measure quantities, I just put in roughly enough to feed everyone!

Thinly slice the cabbage and spring onions and set to one side.

Grate the carrot on a thick grater – you still want to be able to see the pieces of carrot in the final product.

Dice the ginger and garlic.

Preheat a cast-iron skillet and pour in a little bit of oil.

While it is heating, scrape as much of the marinade off the chicken as possible and set it aside.

Lightly rinse the remainder of the sauce off the surface of the chicken. This is not strictly necessary but I would strongly encourage it because the marinade has sugar (honey) in it which will burn on the cast iron during cooking. The sauce will be added back in later!

Lay the thighs into the cast iron and cook for eight to ten minutes (depending on thickness), turning halfway through.

Once the chicken is cooking, heat the vegetable oil and ginger for the noodles in a large, non-stick frying pan.

When the ginger becomes aromatic, add the garlic and other vegetables. 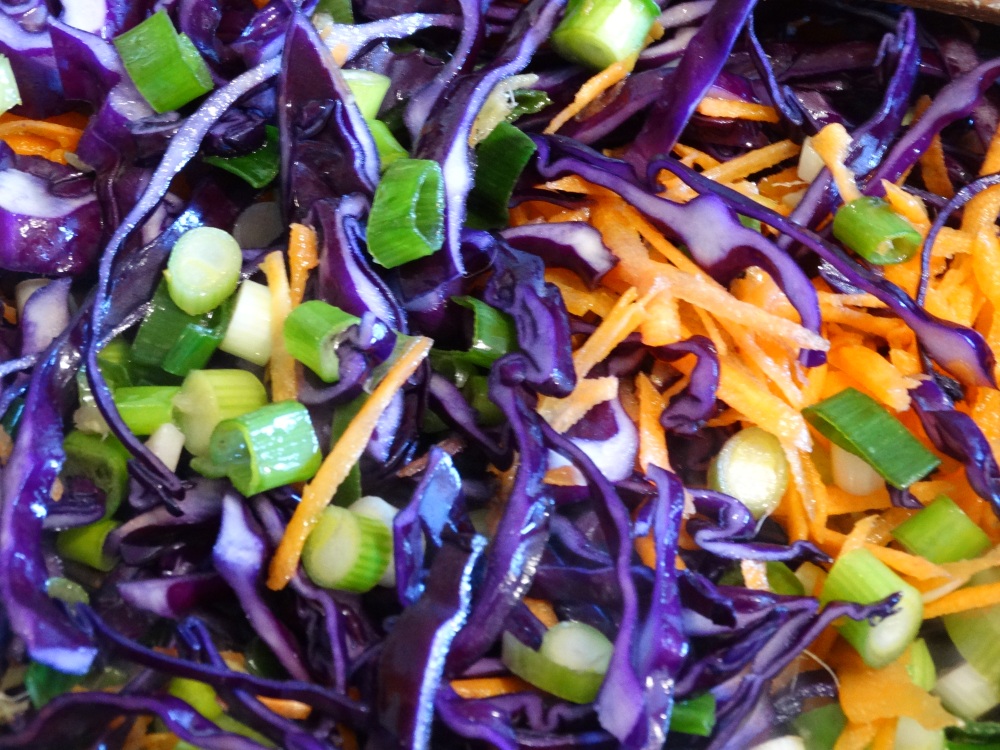 Fry for about two minutes on high heat before adding the noodles. 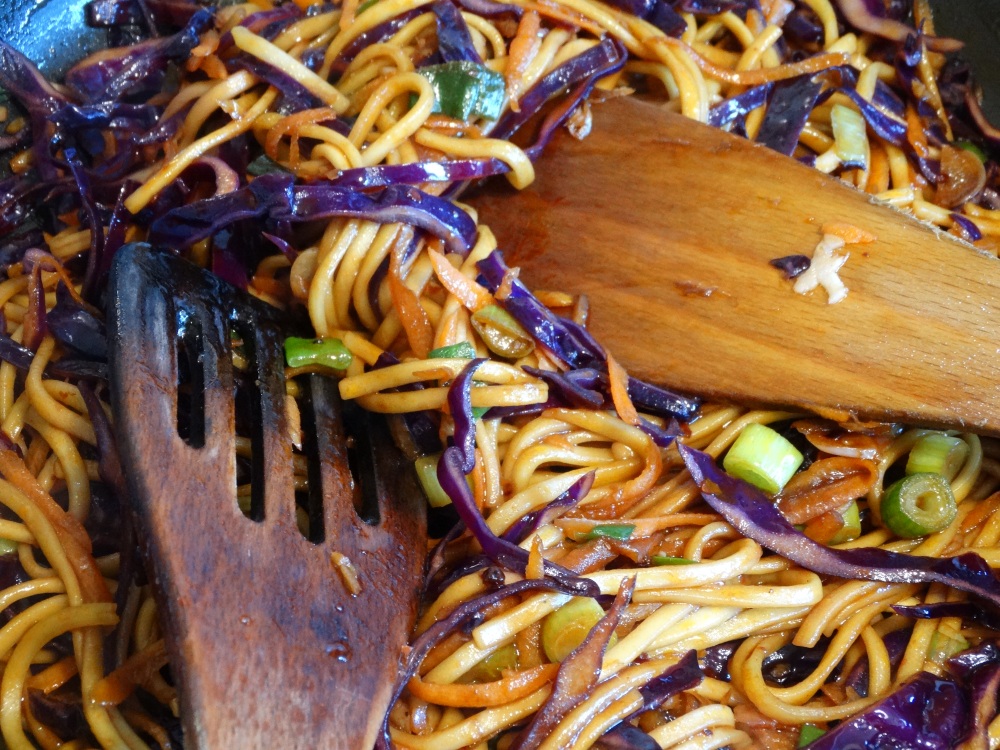 Whisk together the sauce ingredients and add them to the noodles.

Stir and toss over high heat until the puddle of sauce at the bottom of the pan has mostly gone and everything is coated in it. The sauce will reduce as it boils so will become super thick and sticky helping it to adhere to the vegetables.

Just before serving, tip the sauce you scraped off the chicken into the cast iron and toss the chicken in it until it is coated. The sauce will bubble and thicken quickly so you do not want to spend too long on this stage.

Make a pile of noodles in the middle of a plate.

Slice up the chicken and distribute between everyone who is eating, placing it on top of the noodles.

If you want to garnish, sprinkle over some white or black sesame seed, some thinly sliced spring onion greens and a drizzle of the remaining sauce. 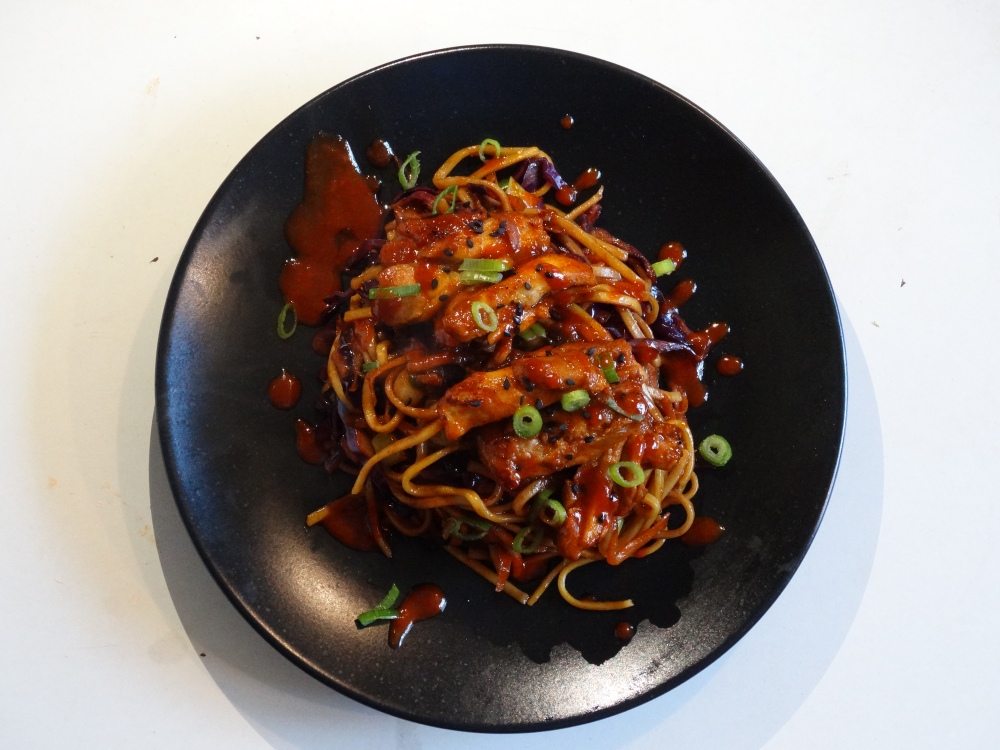 Serve with a side of the spicy gochujang based sauce.

This dish is so delicious and I am absolutely certain it would work with most other meats or even pan fried crispy tofu. If you like spicy foods then you should absolutely try my black pepper tofu – and if you don’t like tofu, just use the sauce from it in this recipe instead and do it with chicken, or just veg!

Have a good one and I will be back next week with a delicious biscuit recipe.