I feel that for my own health and safety, in what is quite possibly a vain attempt not to be taken out by the carbonara mafia, I should start this post by saying that THIS IS NOT A TRADITIONAL CARBONARA. I will explain how to make the classic version of this dish but, for those of you who have not come across it before, this is very much a vegetarian alternative. Also, I would like to make it clear now that I do eat meat and this post is in no way passing judgement on anyone for their food choices: meat, fish, vegetarian, vegan or otherwise.

The main aim of this recipe is to show that you do not need to use a meat substitute to make a delicious vegetarian version of a classically meaty dish. A lot of the time vegetarian food can come off as a poor imitation of meat-based foods but if you just do away with the pretence and accept that dish is going to be different from the meaty version then a lot of problems can be solved. By all means take inspiration from a meat-based dish as a lot of cuisines have iconic meat and fish dishes woven into their culture and it would be a shame to completely ignore these if you choose to go vegetarian (or vegan). However instead of trying to find something like chicken flavoured Quorn steaks or beef style soya mince to replace the meat, why not use something that can be proud of what it is instead of pretending to be something that it isn’t?

The most common complaints that I have heard from meat eaters about vegetarian food is that it lacks flavour or body – body as in substance, not as in the dead body of an animal. Items of food such as tofu are particularly good at getting around this problem by having texture (if it is pressed and cooked well) and can also absorb lots of flavour from whatever they sauce they are in. For this recipe, the mushroom is the star. The mushrooms are seared until all of the liquid has come out and they start to brown. This browning occurs as a result of the Maillard reaction when sugars and amino acids in the mushrooms react with each other. The result is a wonderful depth of flavour which makes the dish far tastier. Mushrooms have a very distinct texture (one which not everyone likes) but it is a texture none the less. By searing them, the mushrooms do not end up boiling in their own juices which would lead to them going soggy so they give a lot of body to the dish.

At the start I said that I would explain why this is not a traditional carbonara – and I’m not just talking about the mushrooms. A true carbonara sauce does not have onion in it but more shocking is the fact that there is no garlic. For anyone who knows me or has followed this blog for some time, you may have noticed that almost every savoury recipe I have starts with garlic – in fact, I will be providing you in a few weeks with a recipe which has two whole bulbs of garlic in it.

Back to classic carbonara, the only things in the sauce are olive oil, guanciale (pork cheek), egg, pecorino cheese and pepper (and maybe some salt – that depends on you). To make this, you first cut the pork into small cubes and fry it in the olive oil until all the fat has rendered out. You then whisk together the egg, cheese, salt and pepper. The still hot, cooked pasta is added into the pan with the pork followed by the egg mixture and everything is then stirred until the egg has thickened from the latent heat in the pasta and the pan. You can then serve the dish and garnish with more cheese, pepper and sometimes fresh herbs.

The recipe below is a great way to enjoy carbonara without the meat – great for vegetarians or people who don’t eat pork. There is an alternative to the classic carbonara, created by Roman Jews where the pork is replaced with carne secca, a cured, salted beef. Alternatively, you could just have the pasta with the egg and cheese sauce and forgo any sort of meat or veg if you do not want to meddle with the tradition too much.

I hope you enjoy the recipe as much as I did when I was making it. I discovered that a little goats cheese instead of some of the parmesan works wonderfully well with the mushrooms so why not give that a go too if you like this?

80g pecorino romano or parmesan cheese (I prefer parmesan myself)

Place a pan of water onto the stove to heat. Add 1tsp salt.

Destalk the mushrooms before chopping them into quarters. Chop the stalks in half lengthwise

Heat a large empty pan for about a minute.

Add the oil to the pan. It should begin to shimmer immediately and coat the base of the pan.

Tip in the mushrooms and gently toss to coat with the oil.

Leave the mushrooms for around five minutes until they begin to brown. They will release liquid in this time which will boil off immediately. At this point, you should begin to cook the pasta in the water you heated earlier. 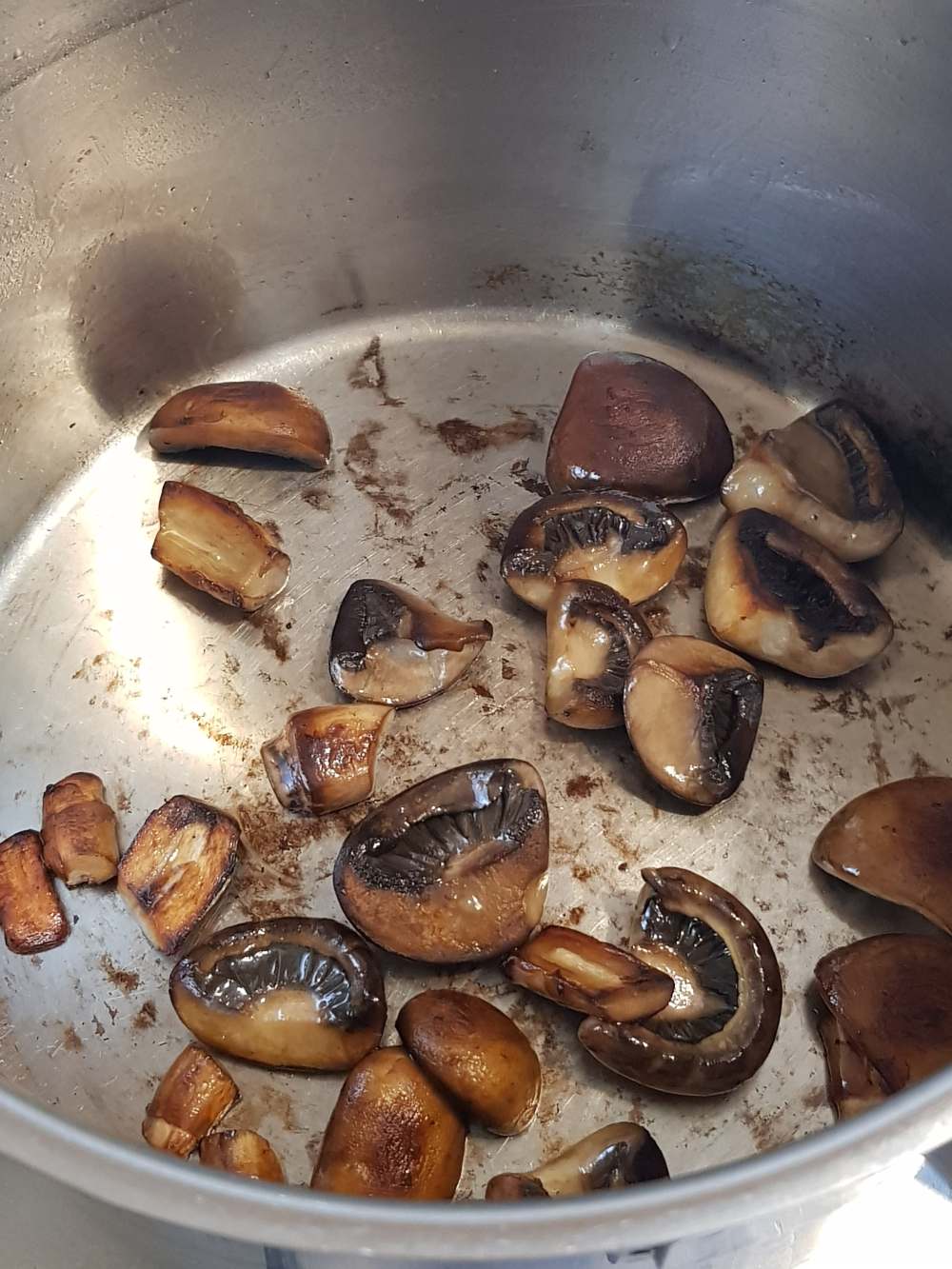 Gently stir the mushrooms to turn them over so they begin to brown all around.

While the mushrooms are cooking, finely dice the onion and slice the garlic thinly.

In a bowl, whisk the eggs and yolks before grating in the cheese and whisking again.

Add ½ tsp salt and the pepper to the egg mix and whisk again. 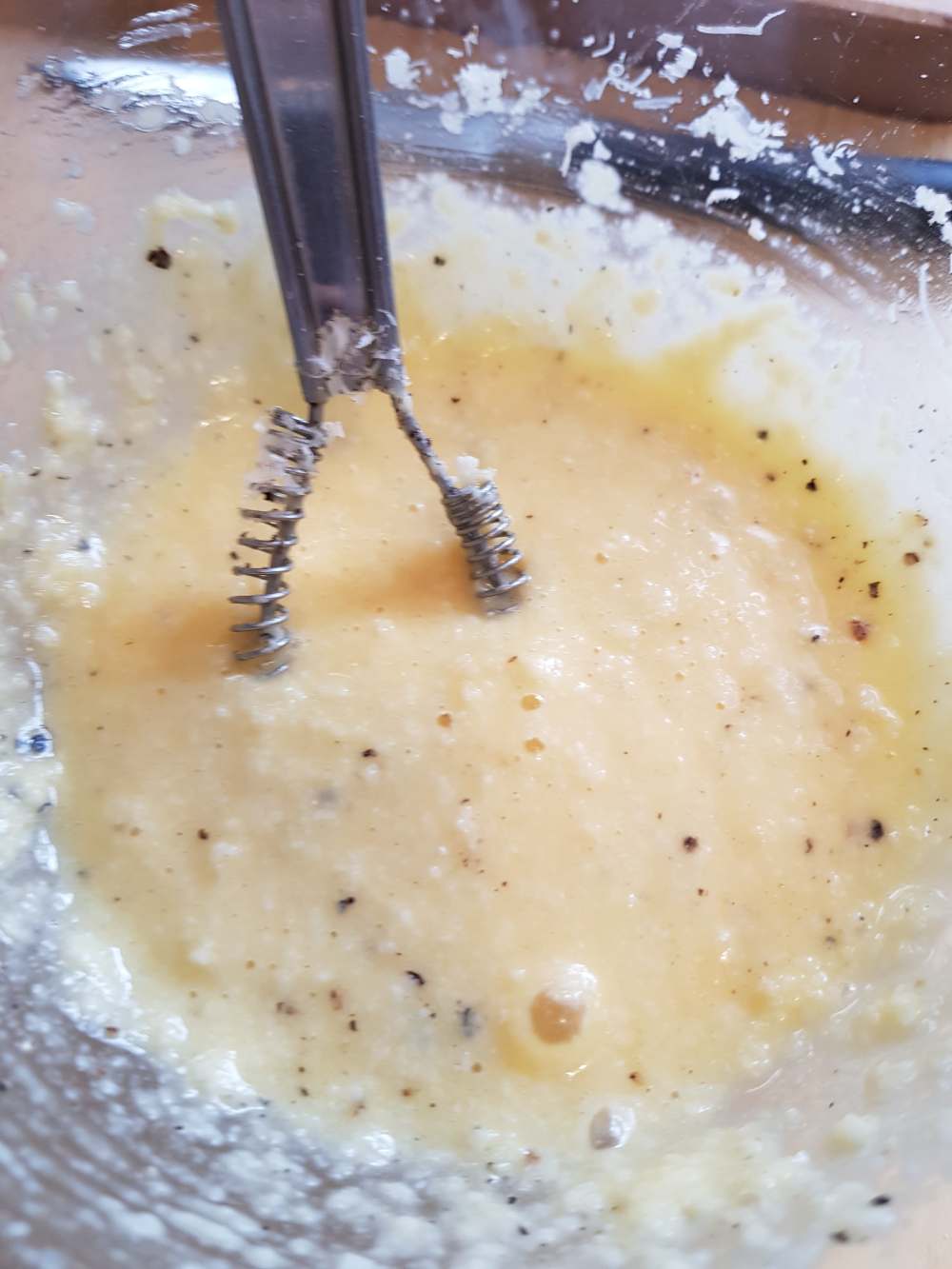 Once the mushrooms have browned, add the garlic and onion.

Stir while they are cooking to avoid the garlic burning. You don’t really want to brown, just cook them through.

Drain the pasta just before it is fully cooked as it will finish cooking with the mushrooms. Make sure to reserve a cup of water from the pasta before you drain it.

Add a quarter of this reserved water to the mushrooms. The water will boil immediately and deglaze the pan, lifting up all of the mushroom flavour that is stuck to it.

Tip the pasta into the pan with the mushrooms and continue to cook until all of the water is gone. Turn off the heat and leave for two minutes to cool a little.

Whisk one third of the remaining water (60ml) into the egg mix. This will temper the eggs so they do not scramble when they hit the hot pasta.

Tip the egg mix into the pasta and stir continuously for a few minutes until the liquid has thickened into a creamy sauce as the egg cooks. Make sure to stir across the whole base of the pan to ensure the egg doesn’t cook unevenly. If the sauce gets too thick, add a little bit of the reserved pasta water.

Stir in the parsley and serve.

I hope you enjoyed the recipe. If you are a fan of mushrooms and pasta, why not check out my mushroom pasta bake – it is one of the first things I posted on this blog; if you are vegetarian just ignore the chicken in it as the dinner works perfectly well without it. If you are looking for something a little bit more on the sweet side, why not make yourself some miniature almond cakes? They are divine.

Have a good one and I will be back next weeks with a deliciously flaky baked dish.