Using cashew nuts as a thickener is something that I have been hearing about for several years now but never actually tried for myself… until this recipe. They are somewhat of a miracle ingredient in this regard, as they provide not only their thickening properties but also their flavour – and their fat content. The flavour helps to meld the other ingredients together whilst mellowing out anything that would be too strong, and the fats and cashew oils help give the sauce a smooth consistency.

This thickening quality isn’t only a property of cashews. My mother makes a delicious cauliflower and almond soup which uses ground almonds to achieve its velvety texture; I have used peanut butter to make sauces which thicken considerably upon cooking; and walnuts are often used in gravies to give them extra texture. Any raw nut butter will work for thickening sauces as the thickening agent (the starch contained in the nuts) has not been cooked yet. It works just like adding flour or cornstarch to a sauce to thicken it (except the nuts also add fat and flavour). The nuts can be ground in advance and added to the cold sauce (or whisked into the hot sauce and cooked for two minutes), added whole to the sauce at the start and then blended at the end or a small quantity of the sauce can be mixed into a nut butter (to slacken it) before whisking this back into the original sauce and cooking out the nuts.

Fat is necessary for making a good, smooth, sauce. The fats in this recipe come partly from the vegetable oil (to sauté the onion and prevent the butter from burning later on) but mainly from the cashew nuts and the butter. Fats give a smooth mouthfeel to sauces which is unobtainable in almost any other way. People talk a lot about avoiding vegetable oil because it is unhealthy and replacing it with things like coconut oil or nut butter but all they are doing is replacing one fat with another – because you need it for BALANCE. The fat will help cut through acidity from the tomatoes and rawness from the onion – but remember that fats need seasoning. If you add fat, you need to add salt. I’m not saying that you have to put in an artery solidifying quantity of the stuff, just enough to help cut through the fat. People will often look at a recipe and see a tsp of salt and just ignore it because salt has been villainised but really, it is necessary for a healthy diet. Like all things, the answer is moderation. If you are cooking for yourself and not eating ready meals, too much salt is unlikely to be an issue as fresh ingredients do not contain much salt (in most cases). That teaspoon of salt in the recipe suddenly isn’t much when you see that the recipe serves six people so don’t just leave it out. It is there for a reason – it will make the food taste good!

Tomato isn’t always used in royal paneer and I have seen recipes both with and without it. Often the tomato (and sometimes the butter) will be replaced by yoghurt which gives an intense creamy richness to the sauce. It is still highly spiced though so don’t worry about a lack of flavour. The term Shahi comes from the title Shahansha which was given to emperors, kings and other royalty in Iran. It refers to the luxurious texture of the sauce and the richness it contains.

The sauce freezes really easily and can be easily made in a batch in advance and defrosted when needed. Just make sure to re-season when you reheat the sauce.

To finish the sauce:

½ tsp fenugreek powder (if you have it)

Grate the ginger and tip it into a large saucepan with the vegetable oil and the butter.

Add the cardamom, peppercorns, cloves, bay leaves, garlic cloves, dried chilis and cashew nuts and fry until the aromatics of the spices are released. Be careful not to burn them!

Roughly chop the onion and add it to the saucepan. Sautee until the onion becomes translucent. 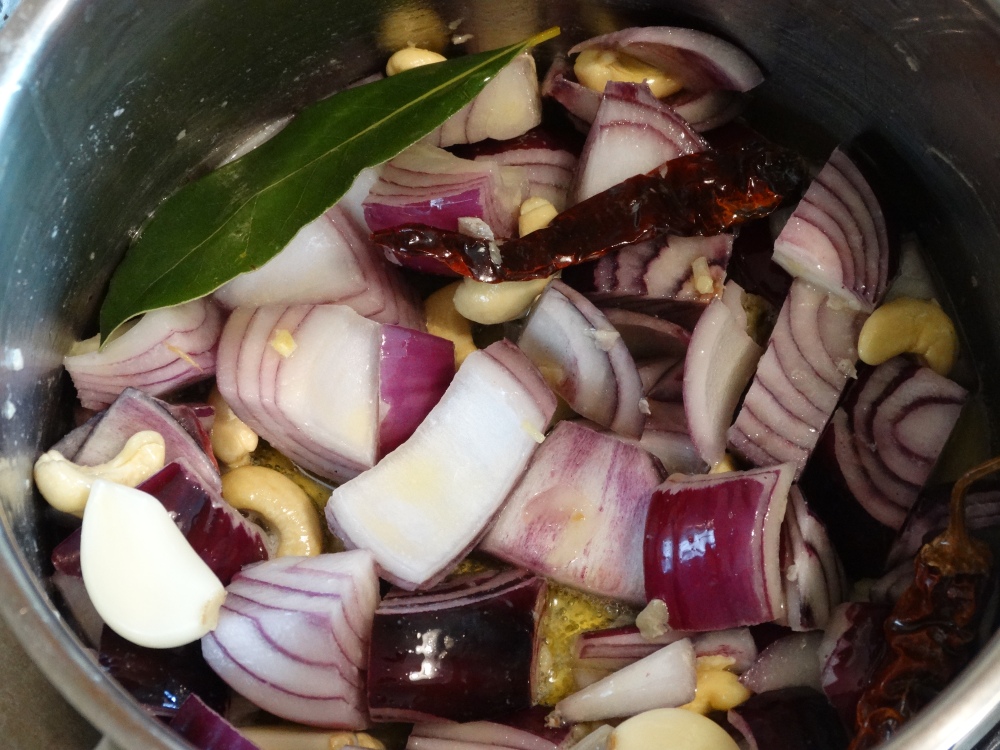 Core the tomatoes and roughly chop them.

Add them to the onion along with the water, salt and sugar. Bring to a simmer and cook for fifteen minutes until the tomatoes have fully broken down.

Blend the sauce mix and push it through a sieve. It will be thick! You should be left with small bits of spice and tomato skin which can be discarded. The cashew nuts provide the thickness to the sauce which can be intimidating to start with but I guarantee it will strain!

Melt the butter in a large pan along with the vegetable oil and heat until it begins to foam.

Tip in the spices and lightly fry them until aromatic – this will bloom them allowing the spices to release their flavour into the rest of the sauce.

Pour in the strained sauce base and stir until everything is combined.

Season with a little more salt and sugar to taste! You could also add some extra pepper or chilli if you wanted.

The sauce can now be frozen if you wish.

Finishing the dish method one:

Chop the paneer into ½ inch cubes.

Heat the sauce until it is bubbling, add the paneer and cook for five to ten minutes until the paneer is hot all the way through.

Stir through the cream.

Pour into a serving dish and top with chopped coriander and a small drizzle of cream.

Add a little oil to the base of a non stick frying pan.

Chop the paneer into ½ inch cubes.

Fry the paneer until it is golden on the base. Flip the pieces and continue to fry until most sides of most pieces are golden.

Pour over the sauce and heat until the sauce is bubbling.

Stir through the cream.

Pour the curry into a serving dish and top with fresh coriander and a small drizzle of cream.

I hope you enjoyed the recipe. The sauce is incredibly flavourful but not spicy (unless you want it to be) so it is perfect for serving people who don’t like their food too hot. This makes a wonderful accompaniment to any curry as the fats in the sauce will help eliminate spice from other dishes but the paneer also stands up by itself as the main dish should you wish it to be.

If you would like to try a different (also vegetarian) curry, check out my recipe for a classic tofu based one or if you eat meat (or are happy to find your own meat substitute), why not treat yourself to a delicious Thai Curry.

Have a good one and I will be back next week with an amazing cultural pastry.