I have always found that Thai curry is one of those foods which is never as good when you make it at home as it is when you go out to eat it. This probably stems from the fact that the Thai curry paste available in most shops is nowhere near as good as the stuff that most restaurants use. It’s also taken me a long time to figure out how to get the coloured oil on top of the curry which gives it the authentic look – and in the process, really helps to meld the flavours together.

The coloured oil is formed when the coconut milk is cracked. This is where the coconut oil starts to split out of the rest of the liquid. It happens when the coconut milk is heated and boiled and as the water is driven off, the balance of oil to water is changed so the milk, which was previously an emulsion of oil in water, now has too high a fat content so the coconut oil starts to leak out. Coconut oil is a colourless liquid however it absorbs both colour and flavour from the curry paste which is why it always has a vibrant shade, far more intense than the rest of the curry.

It should be noted that not all Thai curries contain coconut milk. A notable exception is Jungle Curry which is water based. This is a direct result of the lack of coconut trees in the northern parts of Thailand where this curry came from. Unsurprisingly, it was the coconut curries which caught on in the western world. Whether that was because they are naturally creamier in texture or because they are less spicy is unknown but red, green, yellow, massaman and panang curries have all become very popular in England. Unlike their coloured counterparts both massaman and panang curry make use of peanuts giving them a distinctive flavour. Panang is very similar to red curry and can be quite spicy whereas massaman curry is very mild. It is very creamy and nutty and generally contains both peanuts and boiled potato. Despite the lack of spice in it, massaman curry is definitely one of my favourite curries.

One of the best things about curry is that you can make it to your personal preferences. You can swap ingredients in and out until you find the perfect combination for you so you never have to eat the same thing twice. In my recipes, I always use onion, bamboo shoots and water chestnuts. These come canned from my local supermarket and are normally in the Asian section. It is also common to add red/green/yellow peppers to their respective coloured curries. I have also seen mange tout added to green curries as well as green beans. The chicken can also be switched out with beef, pork, tofu, quorn or just left out entirely. Prawns are also popular in curry however if you use them, you want to add them to the curry very last minute so they don’t become overcooked so make the rest of the curry first and add the prawns just before serving.

I hope you enjoy the recipes below.

Chop the onion. I tend to chop it into eight sections by cutting it in half and then quartering both halves.

Thinly slice the chicken and set aside.

Heat the oil in a wok or large non-stick pan.

Add the curry paste and the garlic/ginger if you are using them. 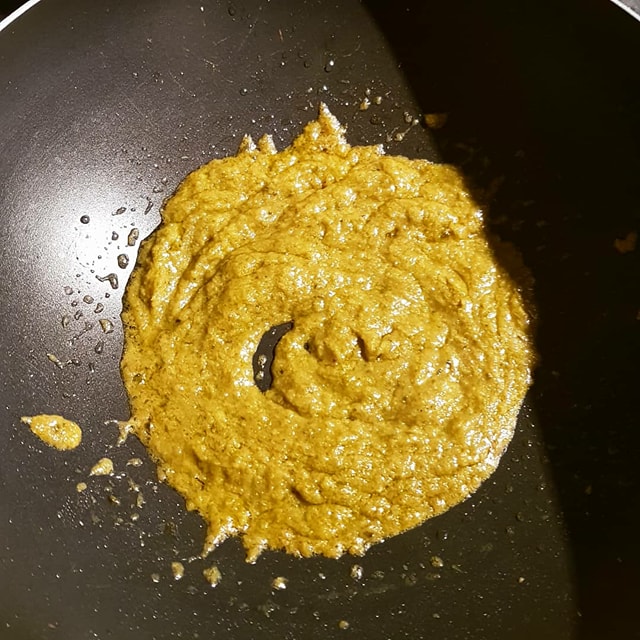 Fry for a minute or two to let the flavours come out of the paste.

Add 200ml of the coconut milk. Stir until it is combined with the paste and then boil for five to ten minutes, stirring regularly, until the coconut milk splits. You will know this has happened as you will start to see coloured oil appearing on top of the mix. The coconut milk will have reduced down a lot during this time. Once you start seeing the oil appear, you should continue to boil the mix for another minute to ensure it is split properly.

Add the onion and fry for another minute or two.

Pour in the rest of the coconut milk, bring to the boil and simmer for ten to fifteen minutes. 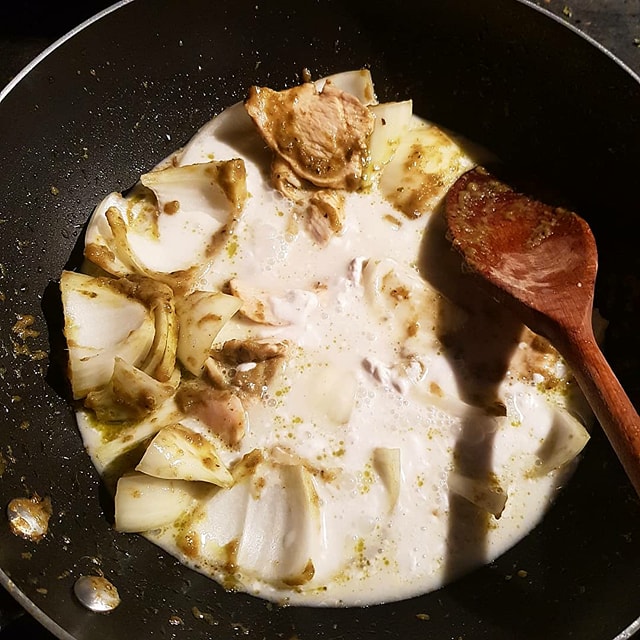 Drain the bamboo and water chestnuts and stir into the curry along with the sugar and a little salt to taste.

Cook for a further two minutes until the water chestnuts and bamboo are cooked through.

This curry is a combination of my basic curry from my last curry post but it is elevated to the next level by the addition of coconut milk instead of stock.

Chicken – off the bone

Spinach (I use three or four frozen blocks)

Peel and cube the sweet potato.

Cut the onion into large chunks – like before, I do this into eight pieces.

Thinly slice the chicken and set aside.

Place the oil, garlic and spices into a wok and heat until the aroma starts being released.

Add the onion and sweet potato and continue to cook until the onion starts going translucent. It’s fine if the sweet potato is still hard at this point.

Pour in the rest of the coconut milk and stir it through.

Bring to the boil and simmer for ten minutes.

Add the spinach now. If you use fresh spinach, add it a little at a time and let it wilt down before adding the next batch otherwise it won’t all fit into the pan! If you are using frozen spinach, just add it all in at once.

Once the spinach has mixed in, bring the curry back to boil and simmer for another five minutes. 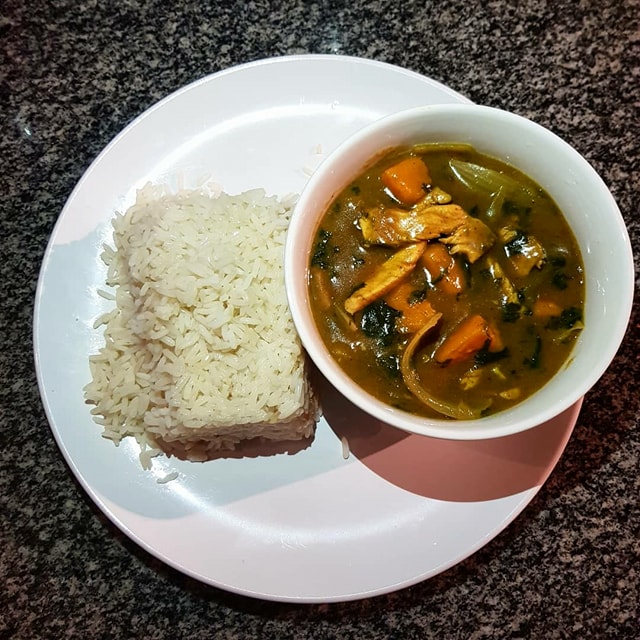 I hope you enjoy these recipes. As I said before, the brilliance of curries is that you can tailor them to your tastes. By adding extra vegetables and removing others, you can create an almost unlimited amount of different meals to spice up your life.

I hope this has given you some ideas about different meals you can add to your repertoire – the hard work is already done when you buy your own curry paste.

If you want to make a lower fat curry, check out my basic curry recipe. Again, you can add whatever meat and veg you want to it and it is a water based curry so has far less saturated fat in it that coconut based curries. The base recipe I use is also vegan!

If you enjoy baking, you should also try your hand at my Raspberry and White Chocolate Tart. Crumbly shortcrust pastry layered with luscious raspberry caramel and white chocolate mousse, this is not one to be missed and will stun anyone who eats it (providing you don’t finish it yourself!)

Have a good one and I’ll be back next week with a recipe for melt in the middle chocolate puddings. These things are actually amazing!