Pasta bakes have been a staple of my lunches since going to university. They are relatively economical, can be made with pretty much anything you have (including leftovers) and are delicious. You can use them to make a small amount of meat go very far which I have found to be a life saver when you are living off a student loan. They tend to freeze well and are also quite sturdy so once cooked, portions can be cut and put either in boxes or just wrapped in Clingfilm before being put in the freezer as the pasta has enough structural integrity to hold its shape when cool. This meant taking a slice of it in my bag to lectures was a simple task and provided me will a filling lunch during the day.

One of the things I find really interesting about this dish in particular (and to be honest, any dish involving mushrooms) is how they cook. As the fruiting bodies of a fungus, mushrooms hide beneath the soil and once ready to produce spores, they absorb liquid – rain in the wild – and sprout. They can appear out of nowhere overnight but this property is also what leads to them being very easy to burn when cooking. When you first add the mushrooms to an oiled pan, they absorb all the oil up too resulting in basically dry frying them. This can cause them to burn if they aren’t stirred constantly which is a faff if you are trying to get on with another part of the meal. To avoid this, small amounts of water can also be added which again, will be absorbed but if you manage your proportions well, can leave just enough liquid in the pan to prevent burning. Once the mushrooms get to a certain temperature, the heat breaks down the cells holding in the liquid resulting in the mushrooms releasing any water, juice and oil which is contained in them also causing them to shrink which is why the reduce down so much in volume whilst cooking.

The other interesting part of this dish (from a science perspective) is the cornflour. When I was younger, I used to be allowed to play with cornflour as a treat if I was well behaved. Whilst this was a messy, messy endeavour for all involved it did have the benefit of being an introduction to quite a complicated bit of science, the non-Newtonian fluid. As a small child, few things were more exciting than this bizarre mixture that ran through my fingers and I could sink my hand into but if I tried to jerk it out again, the mixture would turn solid and shatter with enough force. Even now as a 21 year old, I find it fascinating! In this recipe, you can only have this fun before the cornflour is added to the sauce as the moment it is mixed in, it thickens up massively giving the sauce a smooth texture. 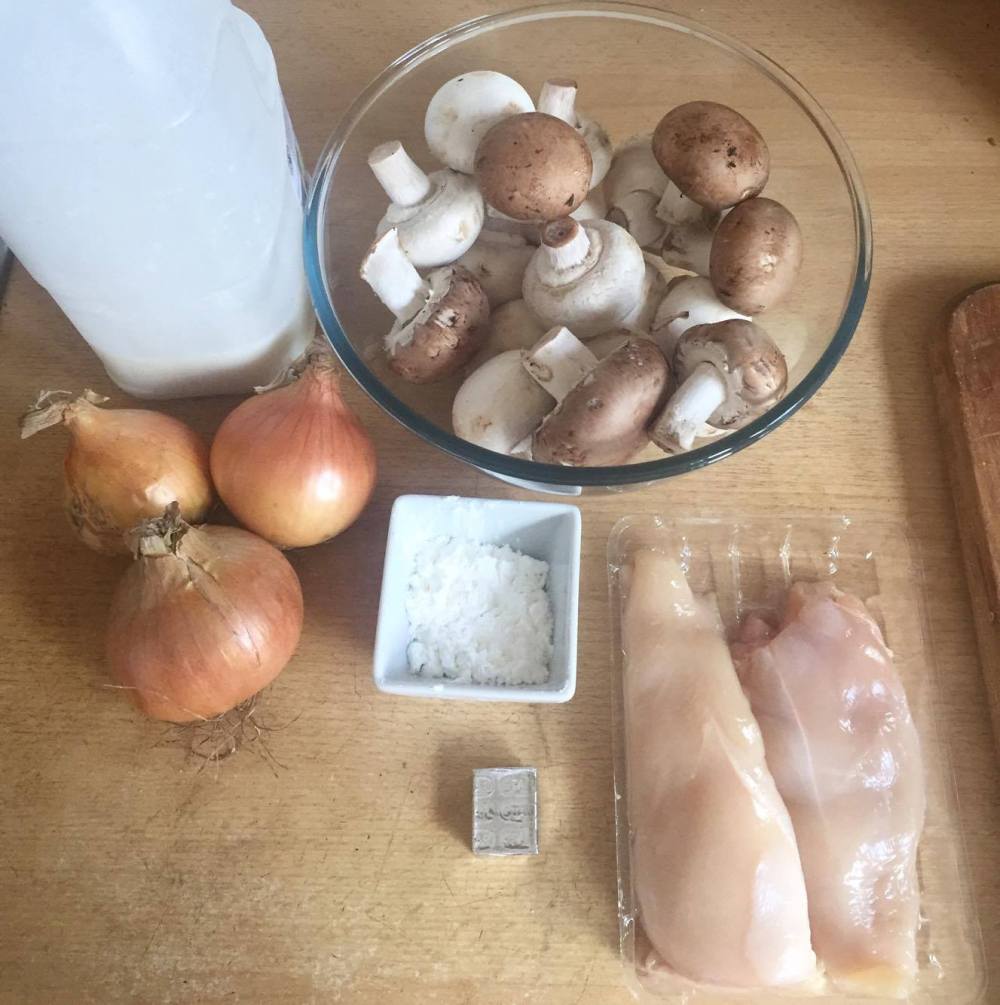 Dice up the onions and sautee in a pan with a small amount of oil.

Once the onions are translucent, add the mushrooms and a small amount of water (I would go for about two tablespoons). This helps prevent the mushrooms from sticking to the pan. Keep stirring until the mushrooms start to release their liquid. (Should you wish to add garlic, one or two cloves either diced or minced should be added at this point)

Add the chicken and stir until it is sealed (that is to say that the outside of all the chicken has gone white.

Add the milk and bring to the boil

Add the stock – if powder, just sprinkle it in and if it is a cube, crumble it up into the mix and stir it through 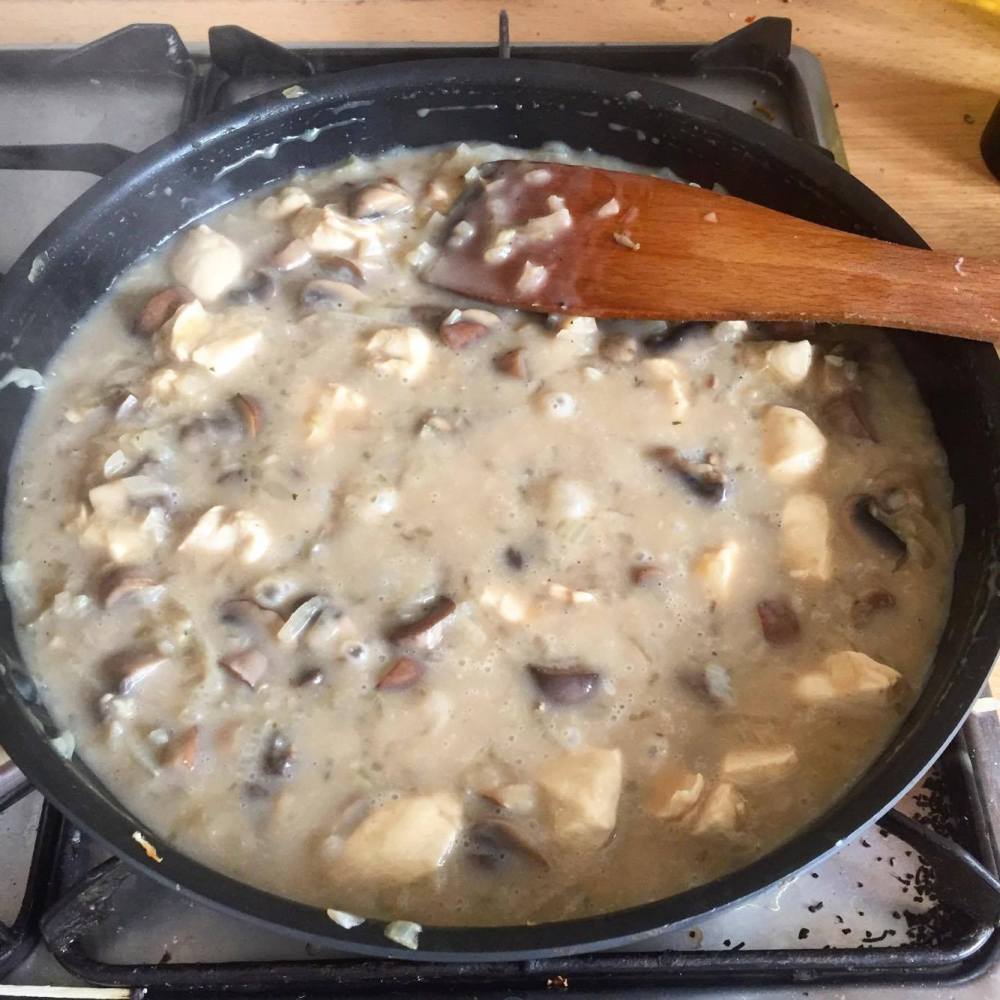 Mix the cornflour with a small amount of water to create a slurry and add it a bit at a time to the mixture making sure that you stir well after each addition and wait for the sauce to thicken up before you add more. If there is more liquid in the sauce, you will need more of the cornflour but you may not need it all!

Let the sauce simmer for 5-10 minutes until the chicken is just cooked and then remove from the heat.

Preheat the oven to gas mark 6 (200oC) and cook the pasta according to the instructions on the bag.

Add a layer or grated cheese over the top and place in the oven. Personally I use cheddar for this but you could use any cheese that you like (though I would avoid blue cheese in this scenario as I don’t think it would go with the chicken and mushrooms particularly well!)

Bake for half an hour or until the cheese has melted and the top layer has gone crispy.

For a vegetarian alternative, use more mushrooms instead of the chicken! It is still delicious and will reduce the price too.

This can be eaten cold and freezes well.

Whether batch cooking for yourself or making dinner for friends, this recipe is wonderful for many occations and is super versatile. You can add or take away ingredients or even change up the sauce completely to keep things fresh. Personally, chicken and mushroom is a favourite of mine so I tend to make this one quite a lot!

Let me know in the comments if you try this one yourself and pop a picture in if you can!

See here for the last recipe in the Cooking From Basics series – a delicious bolognaise sauce – or if you fancy trying your hand at some bread making, why not have a look at my recipe for Artisan Bread from last week.

Have a good one and I’ll be back next week with a super chocolatey recipe that you do not want to miss!!!