Blue food. The very notion conjures up thoughts of sweets and food colouring – neither of which are particularly appealing. This reaction most likely arises from the fact that there are almost no naturally blue foods so eating something with such an unnatural colour can be a little unsettling. The closest that nature comes to presenting us with blue food are the butterfly pea flower (which isn’t eaten itself, just used for its dye) and purple plants.

Most naturally occurring purple foods contain the indicator anthocyanin. This is what gives red cabbage, blueberries, blackberries, purple sweet potato and even black rice their colour. Anthocyanins are red in acidic solutions and dark purple and blue in more neutral ones. The colourful nature of anthocyanins has lead to their popularity among chefs who like to employ a bit of pageantry in their cooking. With only a few drops of vinegar or lemon juice, food and drink can be made to change colour in front of the consumer’s eyes leading to an exciting meal (which can also cost a lot of money).

The purple sweet potato has a vibrant purple colour which stems from the high concentration of anthocyanins in its flesh. When boiled, the colour darkens, becoming closer to navy blue, as boiling water is slightly more acidic than cold water and the indicator in the sweet potato reacts accordingly. As a result, the majority of recipes using purple sweet potatoes will tell you to bake the potato and then scoop out the cooked flesh, as this way none of the colour is lost. You also don’t lose any of the flavour which is important as there are a lot of subtle undertones which can be easy to miss if all the taste is cooked out of the potato. As they have such a sweet flavour, purple sweet potatoes are commonly used in desserts and not savoury dishes. Cakes, tarts, swiss rolls and even bubble tea have all benefitted from the taste and colour of purple sweet potatoes and, because of this, the sweet potato has become one of the most versatile ingredients you can use.

The recipe below can of course be made with normal orange sweet potato or even with white sweet potatoes if you can get your hands on them. I imagine a small trio of soups, one with each of the different potatoes, would be both visually and gustatorily fantastic – though I’m sure that the contestants on Come Dine With Me would say that it’s still too simple, even with the homemade bread that you spent the day baking. Either way, the soup is delicious and I hope you like it as much as I did.

Cost per portion: around 35p

Chop the potatoes into quarters lengthwise, place onto a baking tray and drizzle with two tablespoons of the oil.

Bake for half an hour at gas mark 6.

While the potatoes are baking, dice the onion. This doesn’t have to be super fine as the soup will be blended later.

Place the onion into a pan with the remaining oil and saute until it is translucent.

Roughly chop the garlic and chilli and add them to the onions along with the ginger.

Fry until the garlic and ginger become fragrant and then add the coconut milk and 500ml of the vegetable stock.

Once the mix is boiling, reduce the heat and simmer the soup until the potatoes finish cooking in the oven.

Remove the potatoes from the oven and let them rest for a few minutes until you can touch them without burning yourself.

Peel off the skins which should have released during cooking.

Chop the potato into chunks and add it to the soup – if it is not quite soft yet, let it simmer in the soup for five minutes or so.

Using a stick blender, blend the soup until it is smooth. 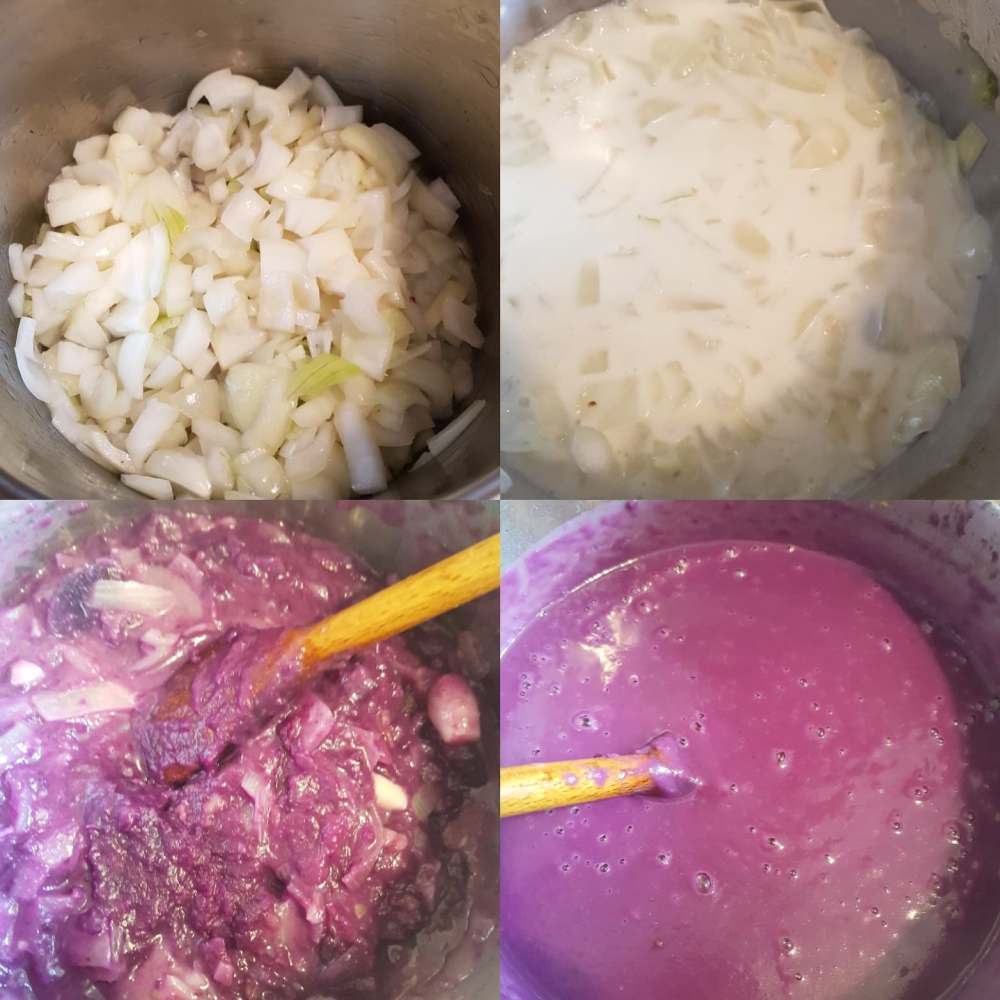 Slowly add the remaining stock until the soup reaches the desired consistency. I like it to be thick enough to coat a spoon – similar to the thickness of double cream.

This soup is really filling and really tasty so it will go a long way. It’s also super vibrant and, if you make it with purple sweet potatoes its colour is phenomenal. Extra portions shouldn’t be an issue as the soup freezes well so you can just grab a portion and whack it in the microwave for a quick meal.

I hope you enjoyed the recipe, if you are a fan of soups, you should definitely check out my curried sweet potato soup or my butternut squash soup. If you are looking for something a little bit sweeter, why not treat yourself and make a honey cake?

Have a good one and I will see you next week with a recipe for an amazing unicorn cake.